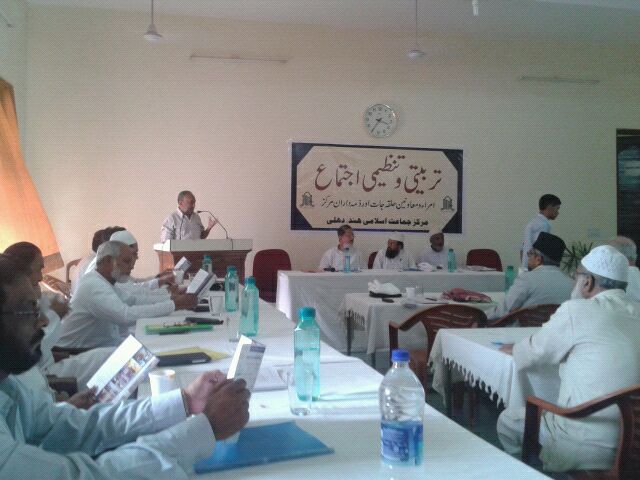 Ameer e Halqa Goa reached Delhi on 24th evening to attend the 3 Day Tarbiyathi and tanzeemi ijtema at Markaz , Jamaat e islami Hind. The three day ijtma started on 25th May and ended on 27th May. The Keynote address by Ameer e Jamaat stressed on the responsibility of umra e halqajaat and stated that fulfilling this resposibility is in the interest their personal success in the eyes of Allah and a means for their salvation . He said this was an opportunity to evaluate our dedication to the Islamic cause.
Later ameer e halqa of respective zones presented their reports. In the 3rd session it was the turn of Ameer e Halqa Goa . In his verbal presentation he introduced the Halqa Goa and briefly discussed the ground realities in Goa. The impact of tourism and the dominant western culture on children and youth and on the institution of family is a great challenge, he said.He said the circumstances in Goa are totally different from the rest of country. Casino, Drugs, alcohol And other distractions have become part of Goan Society.Jb.Abdul Wahid Khan in his report for 2011-13 stated the various innovative strategy adopted to promote better understanding of Islam and its culture. He expressed the need to procure islamic informative folders in Russian and Spanish Language to meet the demands of The international tourists.He appreciated the co-operation from Goan press during JIH GOA campaigns and events. He thanked Allah and the well wishers of JIH GOA. In the concluding address Ameer e Jamaat Maulana Syed Jallaluddin Umri made a special mention of the efforts by JIH Goa in spite of it being a small and new zone.