Latest
You are at:Home»APCR»APCR GOA Chapter Organises Talk on “Politics Of Terror” 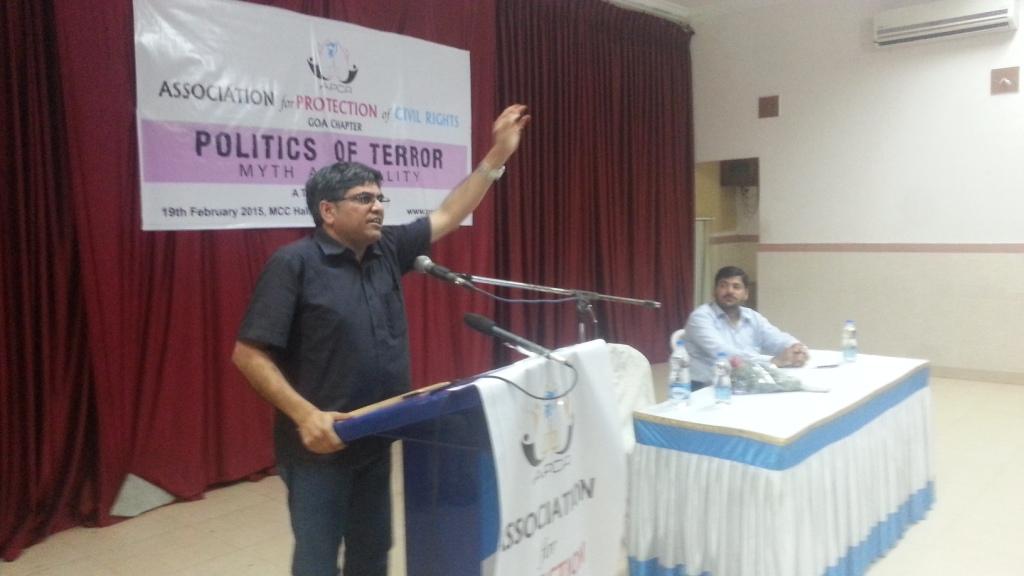 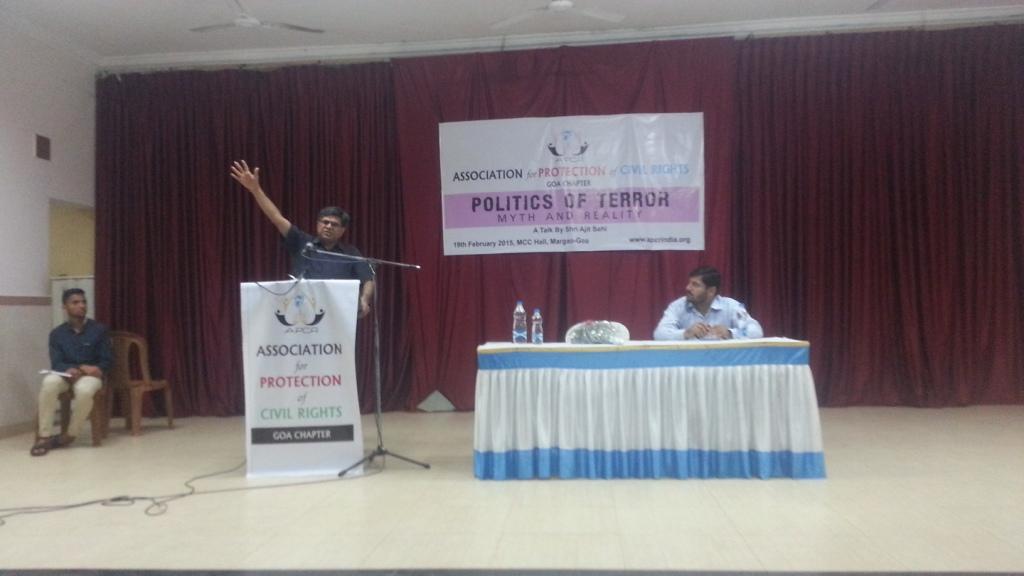 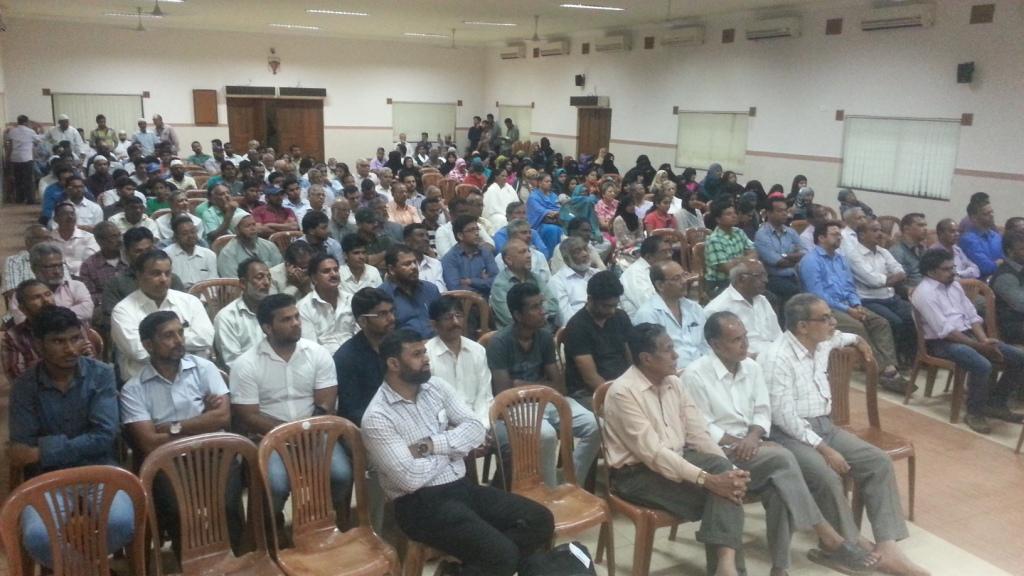 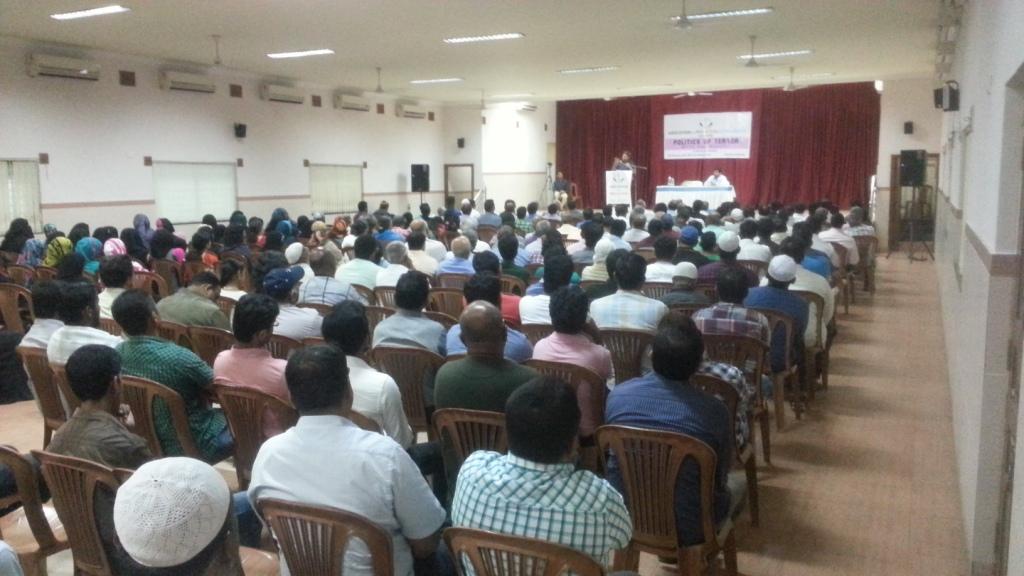 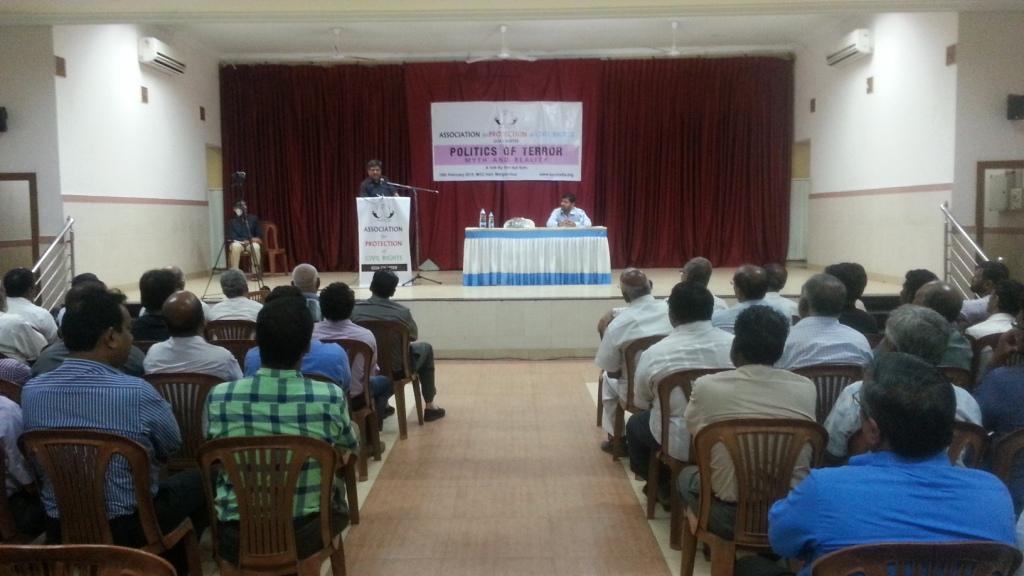 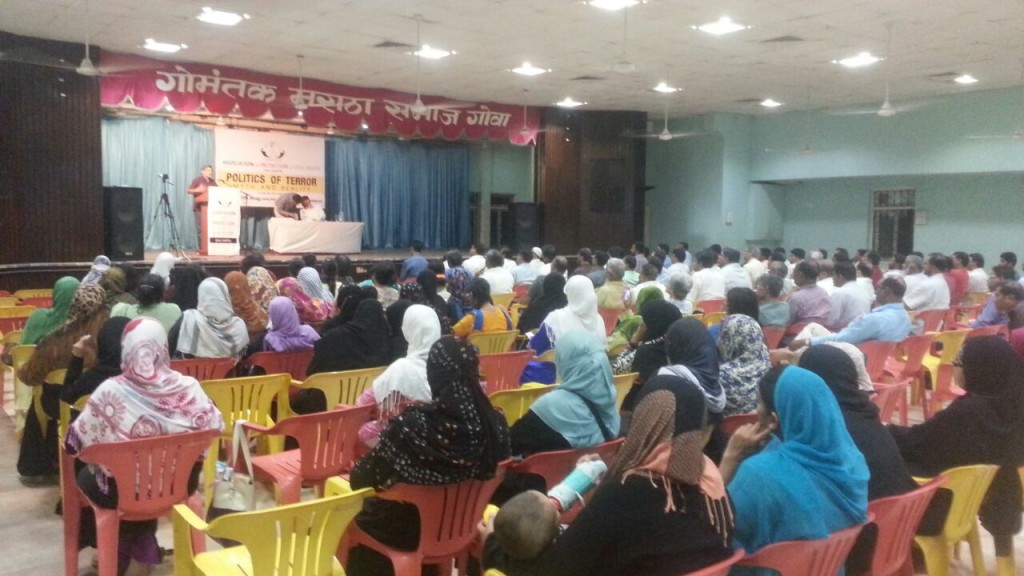 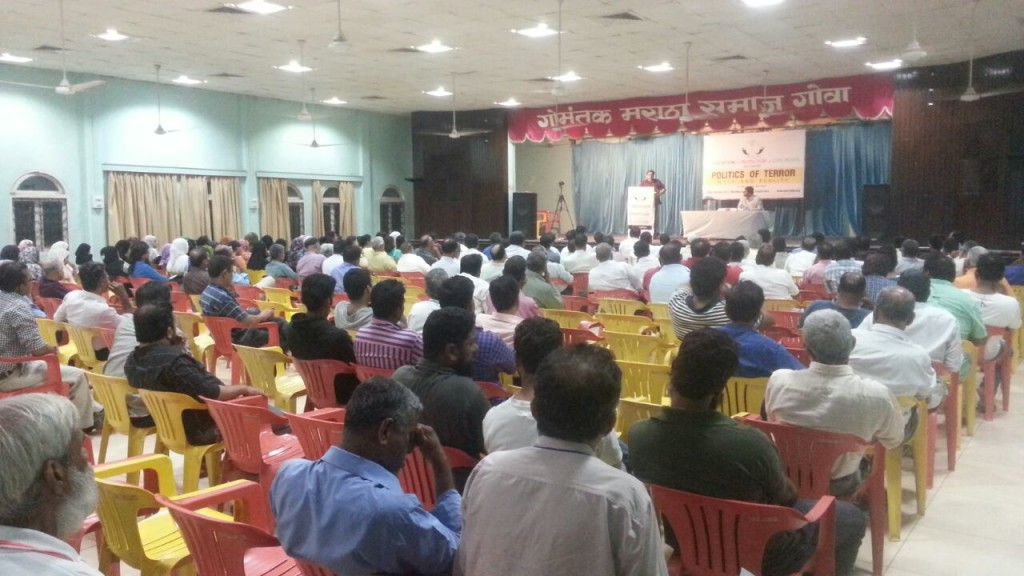 Association for  Protection of Civil Rights  Goa Chapter organized a talk  each at south and North Goa on the topic “Politics Of Terror” by the renowned and famous investigative journalist Mr. Ajit Sahi.  The talk in south Goa was held at MCC hall- Margao on 19th Feb 2015 at 7 pm and the talk in North Goa was held at Maratha Samaj Hall- Panajion 20th Feb at 7 pm.

Br. Abdul Wahab the co-ordinator of APCR Goa Chapter  while stating  the need for  the talk said that Goa fortunately has a very  active civil society but at  same time international and national efforts to weaken civil rights group were constant. The slogan of  war on terror  and  the passing of draconian laws were being used to suppress civil liberties and violate human rights. Hence it was important to appraise the Goan Civil Society  and the masses of   the propaganda  in the name of  “War on Terror”. Mr. Ajit Sahi with  twenty eight years of experience  in the field of journalism  shot to limelight when he exposed the false terror charges on innocent Muslim youth across India. His detailed investigations of hundreds of such cases  forced  the police investigations teams and media houses to run for cover for the blatant  lies and propaganda . He has also extensively written on the counter insurgency  measures adopted  by  the  governments  in the  tribal areas.

In the inaugural address Mr. Asif Hussain  quoted  Pt. Jawaharlal Nehru, who in his address  at the All India Civil Liberties Union (AICLU)  said “ The idea of Civil Liberties is the right to oppose the government”. He said it is the right of the Civil Society to raise questions and ask the Government  about the policies and programs  adopted  by the government. He elaborated how this freedom to hold the government accountable for its  actions will guide the nations towards policies that are beneficial to all the citizens of India. He said currently the policies adopted by successive governments since liberalization of the economy in 1992 has been favouring the few capitalists from India and across the World only. He said the policies of the governments has made basic necessities of life such as education , health and food beyond the reach of the common man.   He said  land acquisition  and forced evictions to transfer  farmers lands into the ownership of MNC’s  at dirt cheap compensation, as was the attempt in Singur is a matter of great concern. Summary arrests of innocents on framed  and false charges, dislodging  the tribals of their  lands in the garb of fighting naxalites  and fake encounters were all serious matters that needed to be addressed for India   to  fulfill the aspirations of its countless people . He said until the  governments are exposed of their misdeeds and faulty policies  the dreams of Indians will be unfulfilled. He said governments across the world were using  “ War on Terror “ to invade and occupy the land and resources of the nations.  Fomenting  and  engineering  discord in and within nations to weaken governments  and  later sign economic  agreements with such nations after installing  puppet regimes has been the practice of US and its allies.  Unfortunately ever since India has extended a friendly hand to Israel and USA  India’s Internal security seems threatened. At this juncture he said it was necessary to  unveil the propaganda behind war on terror , expose the myth of terrorism and understand the Politics of Terror.

Mr. Ajit Sahi    talking on the subject of Politics of Terror- Myth and Reality  said  that it was only in 2008 that he set out with a singular mission  to identify the terrorist groups across in India and since then has a pedigree  in talking  on the subject after extensive  field investigation. He said he started with Muslim groups and he later included the Naxalites too in his investigations. He  asked what else can be journalism if it is not investigative. He said using words such investigative journalism and true journalism was wrong because by definition journalism is to investigate and tell the truth.  His inspiration he claims was a the description of the news he stumbled upon in a book and it described news as “what someone somewhere is trying to hide , everything else is advertisement.” He said the best examples of investigative journalism was the  unraveling of the “Watergate scandal” that led to the resignation of the then President of  USA  Mr. Richard Nixon. He advised that when one reads the newspapers  in the morning  they should  check whether the content is something that someone somewhere is trying to hide or  whether it is a public relation exercise  as it was with the  auction of the suit of the Prime Minister. What surprised him most he said was that after every bomb blast the authorities would immediately identify the perpetrators  immediately  and secondly what bothered him and confused him was the fact that within 3, 4 or 5 days after the bombing the police would arrest few men and claim that these were the people behind the bomb blast  without even completing the  on-ground investigations which takes a lot of time. Thirdly the lack of interest by all in the following up  the progress of the cases in the courts in spite of the bombing being accorded prime media attention also raised his doubts.

He detailed out the legal procedures involved in the  cases of arrests including  intimation of arrests to the judge within 24 hours  followed  police custody interrogation and investigation and   judicial custody until  filing the charge sheets which is called the framing of charges. He said it is very  rare that a judge does not   accept the charges and even more rare that  a judge discharges the accused in this period of framing the charges as has happened in the case of the BJP president Mr. Amit Shah who has been the accused in a triple murder investigation. It is only after this process that the trial begins with witnesses bought  forward by the prosecution and the defense followed by cross examination of witnesses to be followed by arguments by either side and finally the court judgement.  But what surprised and shocked him the most is that  nobody gave the same amount attention when the cases go to the courts. The charge-sheets he said are written in a manner that reading it is herculean task and even if one reads  it is  impossible to comprehend it and understand what it states. He said that there are charge-sheets that run into thousands of pages but after naming the accused in the beginning  no more reference is made to the accused in the entire charge-sheet that follows and since it is cases of  terrorism most end spending years together in Jail with no charges leveled.  The nature  and  emotion behind of terrorism cases is such that no judge would want to go against the public perception of the charges and bail in such cases is a distant dream. He later said in his investigations across the country including the red-corridor states he is yet to find even one accused of terrorism amongst the  Muslim, dalit or a tribal to be genuine.  Citing the example of the attack on Indian institute of Science in bangaluru how investigating the authorities  can mislead the public through its PR department  going to the press because today one does not question the authorities. Every statement  by the police and government authorities  is accepted  as truth. Currently an atmosphere has been created to influence our mind set to accept the fraudulent counter terrorism measures and accept it as truth and reality.

He went on further to expose the hypocritical slogan of War on Terror  by the USA  and how false claims of WMD’s  led to the  war against Iraq . He said then how lies and propaganda has been the tool of the Governments across the world   and arm themselves with draconian laws to suppress  the questioning of their actions. He said the modus  operandi  is to file cases against the innocents   by  investigations teams from across the states in India. So when the accused gets released from one court he  is later picked by investigation teams from another state  and so forth and languishes in the jails for nearly 20 years or more until he gets acquitted. He went  on to remind the audience of the famous Haren Pandya case in Gujarat whose murderers are yet to be identified. He informed the that on 16thMay as Narendra Modi was leading to become the Prime Minister of India on that same day the Supreme Court was releasing  an order acquitting 6 persons who were falsely accused of the Akshardahm Temple attack in 2002. And the order went on to say that these six men were framed  and that the Gujrat home department did not apply its mind while sanctioning the prosecution of these innocents. He even referred to the fake encounters in Gujurat in which close to 22 people were killed  during the time the Narendra Modi was the chief Minister of Gujrat.

He went on to conclude that  the common man never likes wars  but it is always the case that they are dragged into it by the rulers , telling them that there is a threat and  raise the decibel of patriotism to lead them to  support the war. Every nation that is rich in natural resources has been the victim of USA represented by MNC’s. Common men have always been used as pawns to further the agenda of the few capitalists and every voice against their agenda of monopolizing the natural resources of the world has been thwarted by the bogey of war on terrorism. He said to restore human rights and civil liberties one has to constantly ask questions  to unveil the lies  and propaganda of those in power, whoever or wherever they may be.

The program was well attended at both the places  and in the questions and answer session many important questions were raised about the collaboration between the  those in power, media and investigation agencies. Mr. Ajit Sahi spoke with confidence and his experience helped him in dwelve deep into the subject. Many activists  from Goa were relentless in asking questions and were keen to prolong the  discussion to learn from Mr. Ajit Sahi