Latest
You are at:Home»ZONAL ACTIVITIES»ICIF organises a programme on ‘Islamic Finance and Banking in India-Opportunities and Challenges’ 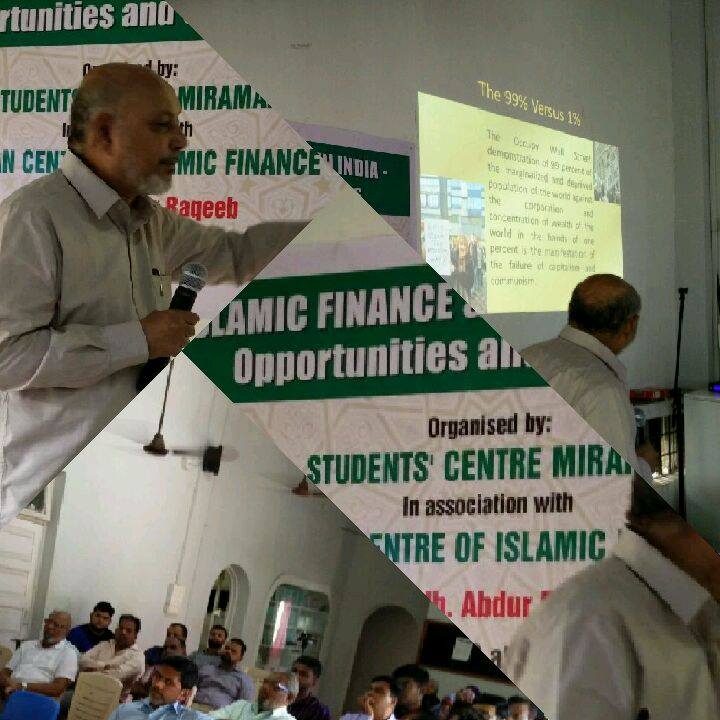 ISLAMIC FINANCE AND BANKING IN INDIA- Opportunities and Challenges

Students’ Centre Miramar organised a programme on ‘Islamic Finance and Banking in India-Opportunities and Challenges’ on 28th July, 2016 at 4.30pm.

This was a one of its kind programme to be held in Goa. The talk on the subject was given by Jb. H. Abdur Raqeeb, General Secretary of Indian Centre for Islamic Finance (ICIF), Convener for National Committee on Islamic Banking and a Member of Central Advisory Council of Jamat -E- Islami Hind.

The Inaugural address was given by CA. Shaikh Irshad Mussa. He said it was an historical day as it was the first time that the concept of Islamic Finance was being introduced in Goa. City based Chartered Accountants, entrepreneurs and MBA students attended the program.

Jb. H. Abdur Raqeeb, gave an overall picture of what Islamic Finance and Banking is all about and how different it is from conventional banking. Interest is prohibited in Islam. It becomes difficult for a Muslim to deal with conventional banks whose basis of business is lending money on interest. This is contrary to the teachings of Islam. He explained the ethics of Islamic Banking such as Prohibition of interest, Prohibition of speculation, Prohibition on financing illegitimate business and Risk sharing & Asset backing principles.

Jb. H. Abdur Raqeeb acquainted the gathering about various investment products available under Islamic banking and emphasized on investment needs for Muslims. Through his talk, awareness was created regarding the development of Islamic banking at the global level. Jamat-e-Islami Hind has been instrumental in negotiating talks with the Government of India and The Reserve Bank of India to introduce Islamic banking since it is a basic need of Muslims. It was a pleasant eye opener for all those gathered that Islamic banking has reached the approval stage in India. He cited a brilliant example of how a person is given a choice between veg or non-veg food in a restaurant; similarly, a customer of a bank should also have a choice of interest free banking.

The talk with Jb. H. Abdur Raqeeb was motivational. He recommended that we start Micro finance based on Islamic principles in our small state of Goa. Similar such set ups of Microfinance are already functioning successfully in various states like Kerala, Karnataka, Telangana and many more.
The program was convened by Subhan Shaikh
and it concluded with vote of thanks by CA. Shaikh Irshad Mussa.