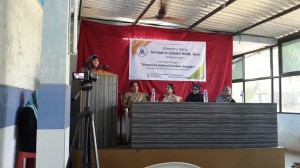 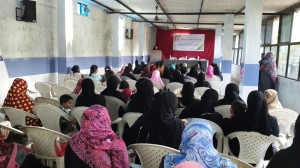 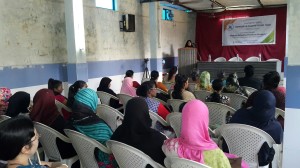 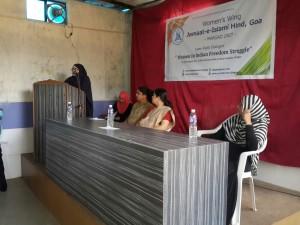 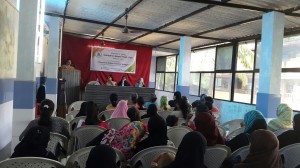 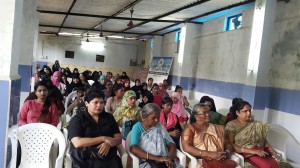 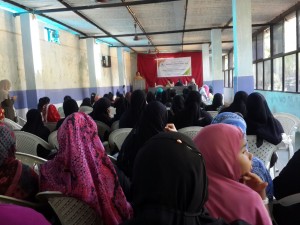 The program which commenced with the inaugural address was attended by around 65 women belonging to different faiths and from all walks of life. Mrs.Meenaz Bhanu in her talk introduced the various activities of JIH & stressed upon the need & importance having inter-faith dialogues for communal harmony. The speakers of different faiths presented their views on the theme of the event.

Mrs.Lira Menezes Gama (Professor of Economics, Damodar College) spoke on the topic “Christian Women in Indian Freedom Struggle”. She spoke about how women especially from poor and backward classes contributed in the freedom struggle. She named some of the Christian freedom fighters such as Sr.Nivedita, Pandita Ramabai Saraswati, Mira Alphonso, Akamma Cheriyan, Annie Mascarenhas and many others. They worked for the freedom caring less about their homes and lives.

Representing mahila mandal Mrs.Reena Panandikar (Secretary Mahila Mandal & Social Worker) spoke on the topic “Hindu Women in Indian Freedom Struggle”. She named great leaders who fought bravely in gaining us freedom which included names as Rani Laxmibai, Rani Chanamma of Kittur, Sarojini naidu and many more. She spoke on how bravely these ladies managed to boycott foreign goods as a sign of social boycott

Concluding the event the last speaker for the day Mrs.Farheena Hussainy (Principal Jamiat-us-Salihat, Margao) spoke on role of Muslim women in Indian Freedom Struggle naming Begum Hazrat Mahal, Bi Amma, Zulekha Begum among the many muslim women who immensely contributed from various aspects during the freedom struggle. Expressing pain over the current situation of communal polarization she raised a question on how would we unite as one country if we continue fights and hatred towards each other in the name of religion, caste etc. How would we tackle the evils taking birth in our society?

Mrs. Fareeena emphasized on the effective role the women fraternity could play in the eradicating social evils from the society and inspired the gathering for constructive action in this regard..

The book titled “History & Heritage of Muslims in Goa” written by Prajal Shikhardande was presented to all the participants. The program concluded with prayers and all were left with Great Spirit of unity and social brotherhood Networking and interaction followed the event for mutual rapport building