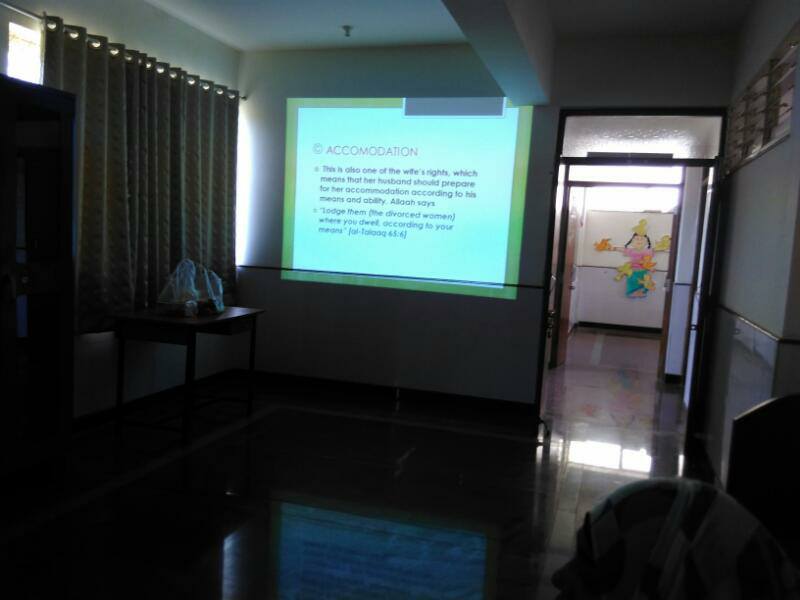 The women’s wing of Jamaat e Islami Hind Vasco conducted a pre- marriage and post marriage counseling program on 6th and 7th April 2017 at Aashiyana institute-Dabolim
Girls from around Vasco attended the 2 day session.
The program commenced with the recitation of the verses of The Qur’an, followed by PowerPoint presentation on ‘Marriage in Islam’ in which the rules and regulations concerning marriage were elaborated.
Mrs Rehana Khan spoke on the topic ” Reasons for breaking of marriages and their solutions ” wherein she explained in detail the reason for the rapid increase in divorce rates and gave some important tips on living a good married life.
‘The marital life of Sahabiyat’ was explicitly explained by Mrs Salma Makandar. She explained how the Companions of The Holy Prophet Muhammad (pbuh) endured hardships yet led a contented life.
There was a question and answer session where the audience got an opportunity to clear their doubts.
The session for the first day ended with a dua.
The next day began with the recitation of the Holy Qur’an.
A PowerPoint presentation on “Naye Rishte, Naye masael” was very well explained by Mrs Shaista Shah. She briefed about the challenges a woman faces after marriage and how she could counter them in gentle way.
Mrs Tafsin Shaikh put forth the Importance of Dua before and after marriage.
At the end of the session feedback was taken from all the girls who attended the progm.
All the girls said that such programs were needed for each and every girl before marriage. And the program cleared a lot of misunderstandings and apprehensions which the girls had.
The program concluded with a Dua by Mrs Shaista Shah.