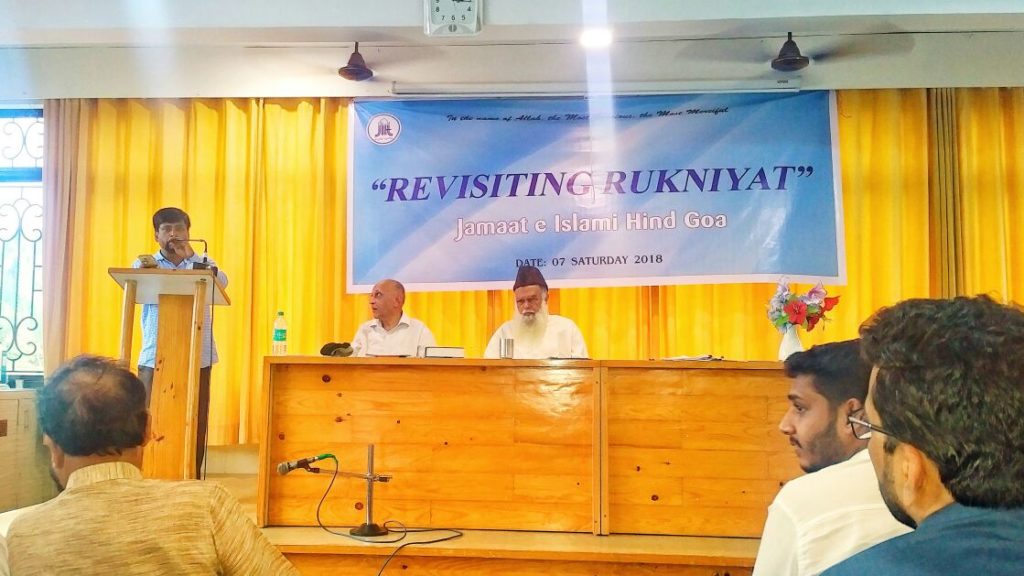 Islamic Center Goa
An one day Arkaan (Members) and selected Karkanun ( Associates) programme was held at Islamic center Mapusa on 7th July , 2018 on the theme “ Revisiting Rukniyat”. The programme began with the recitation of the verses of the holy Qur’an. Speaking on the occasion in his welcome address brother Asif Hussain (Secretary, JIH Goa) said that the cadres meet has been organized after a long hiatus and the need was felt that one such meeting should be called so that we get an opportunity to revisit ideals and demands of rukniyat( Membership). Further in the programme Maulana shabbir khan saab (Member of JIH Karnataka state advisory council) who was the guest speaker shared his memories about the sacrifices and dedications of JIH members whose sole objective was to seek the pleasure of Almighty Allah. He mentioned the sacrifices of Janab Mehmood Ahmed Khan saab who hailed from Aurangabad City of Maharashtra, and served as Ameer e Halqa of Tamil Nadu Halqa for few Years. He said that at one occasion JAMAAT-E-ISLAMI HIND, the markaz (headquarter) was going through deep shortage of financial resources and an appeal was made to all the members of the Jamaat, asking for contributions.
When the letter reached Mehmood Ahmed Khan, he wasted no time. After consultation with his wife he sold one the two bulls which they used to plough the fields and dispatched the amount to the headquarters and he himself took the place of the sold bull to plough the fields. He further said that such examples of the sacrifices, and spirit, like the one displayed by Janab Mehmood Ahmed Khan will always leave a lasting impact in our lives and a case to emulate also. In his concluding address Janab Abdul waheed khan, Ameer e Halka, Goa, said that the tehriki bond between Karnataka and Goa has been quite strong over the years and Karnataka Tehreeki leadership has always guided Goa throughout its development right from its infancy stage till it’s separation from Karnataka. He said the biggest contribution of Tehreek for the ummah is orienting the community towards real Islam from ritualistic Islam. He further said that the purpose of today’s program was to recall & revive incidents from our past leaders & to trace the glorious incidents of motivation and Inspiration. He said, literature was our companion everywhere and this aspect needs attention in the present times. He said Almighty Allah has blessed Goa tremendously in protecting the ummah from anti social elements on one end and dignifying the image of Tehreek among Goans on the other end. He concluded his talk by expressing his sincere thanks to Janab Shabbir Khan saab for spending time with us and for guiding us. The programme concluded with Dua.