Latest
You are at:Home»BIE»Childrens Islamic Books / islamiyat.in launched by KSP 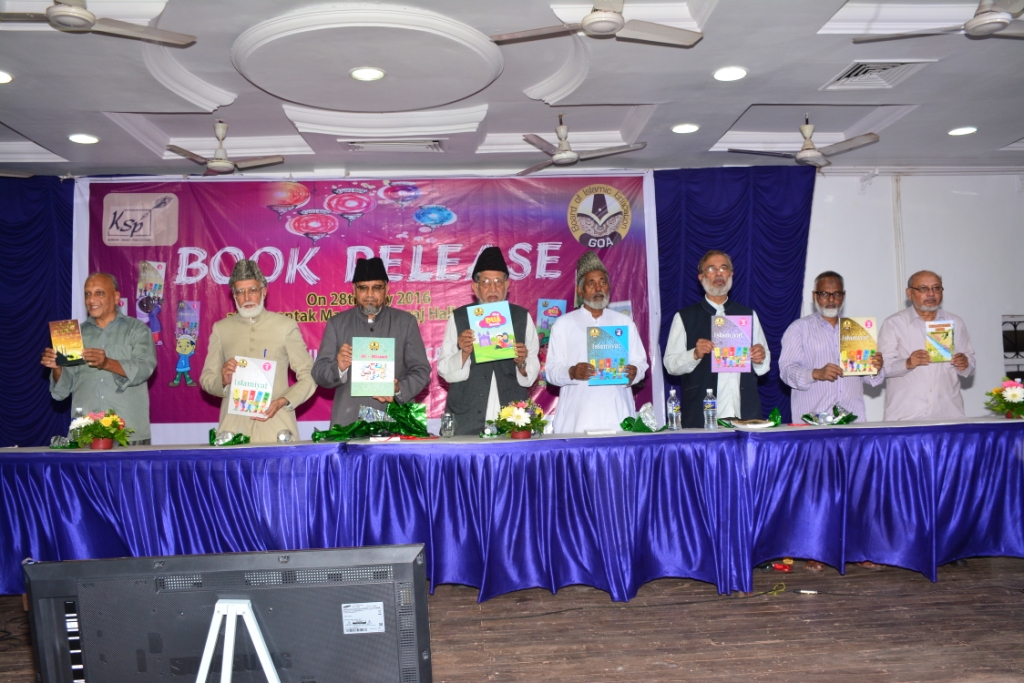 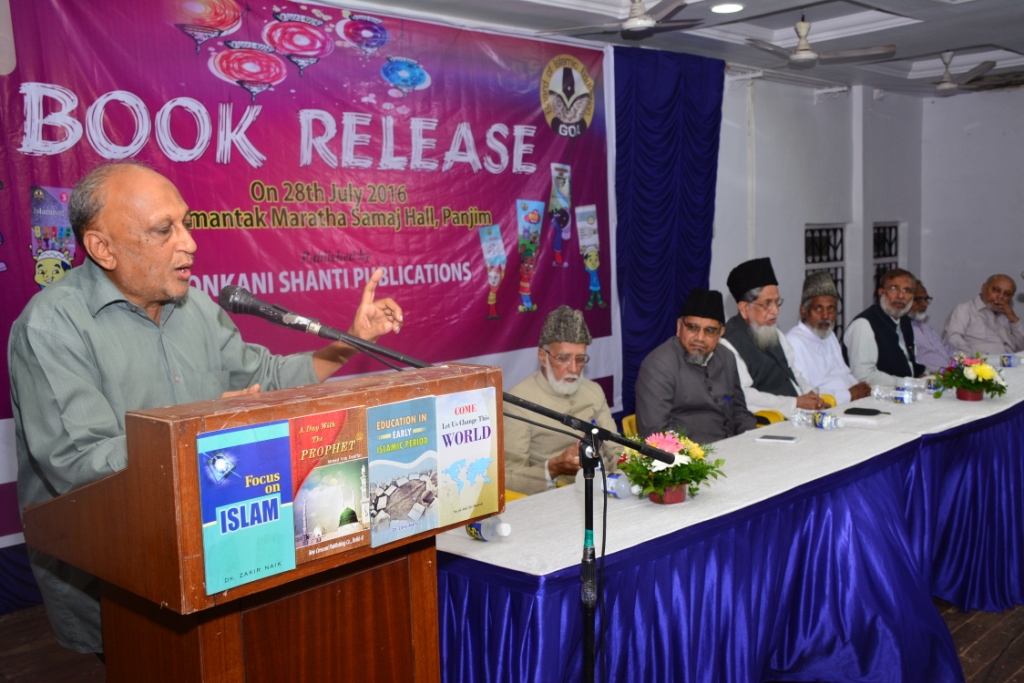 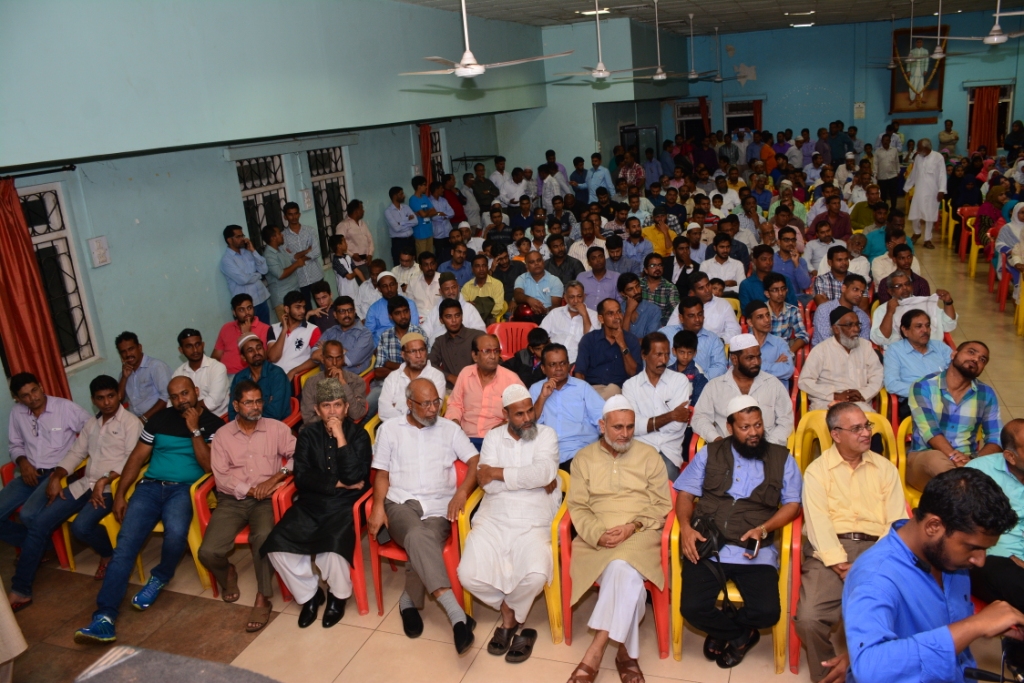 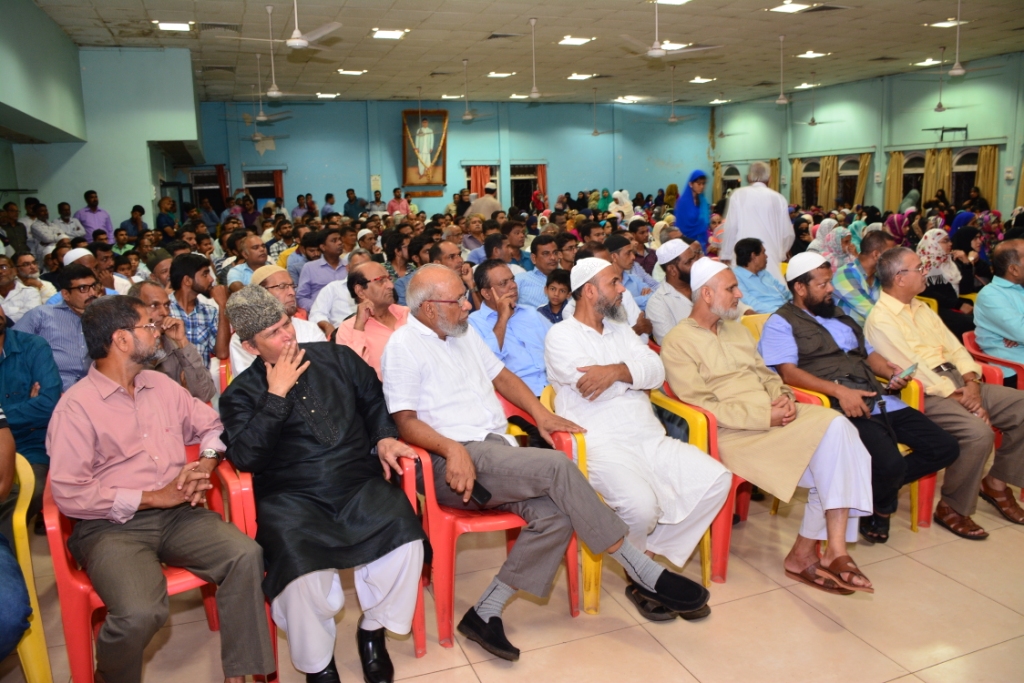 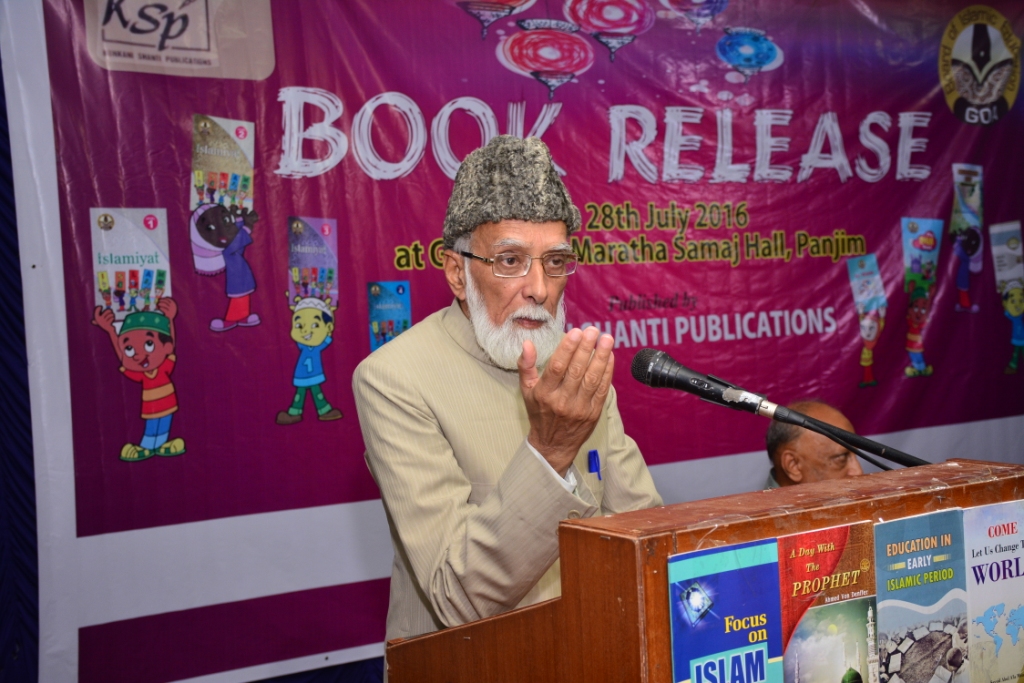 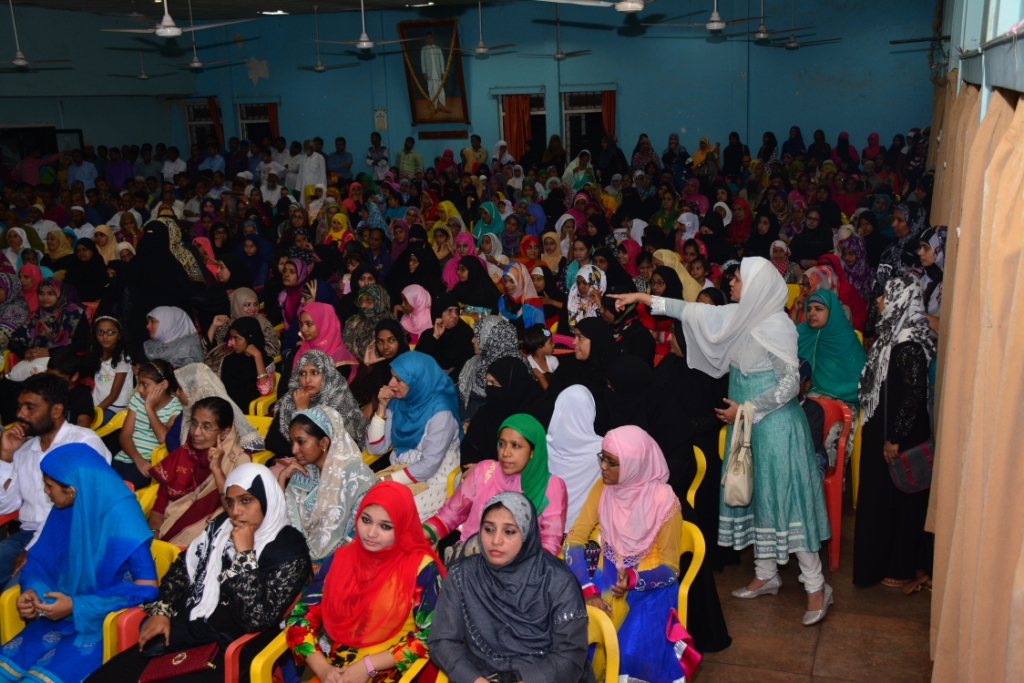 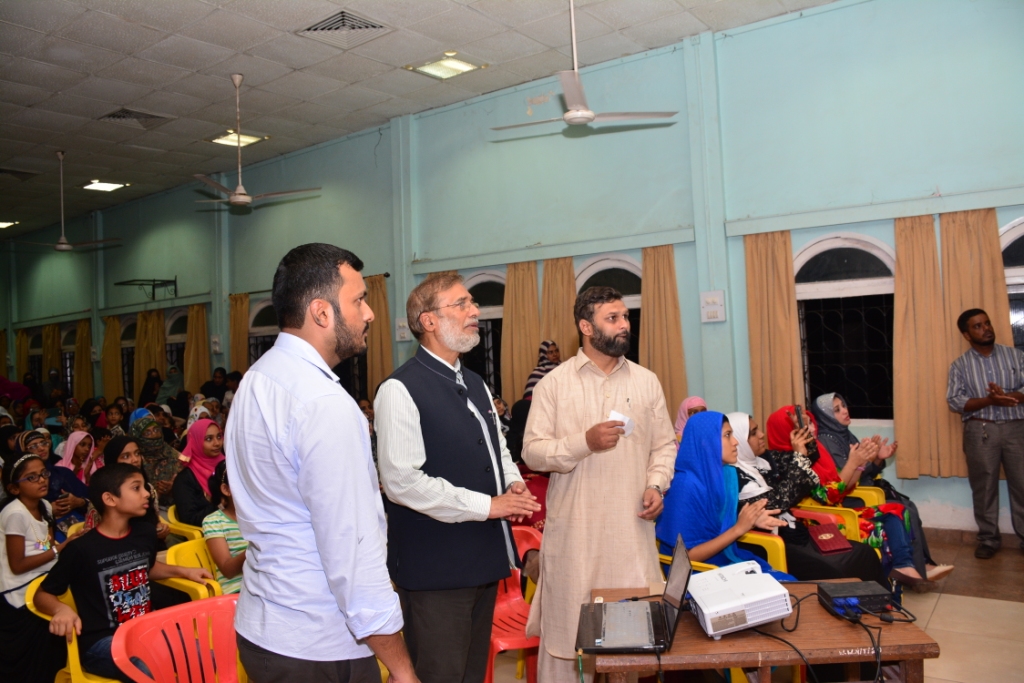 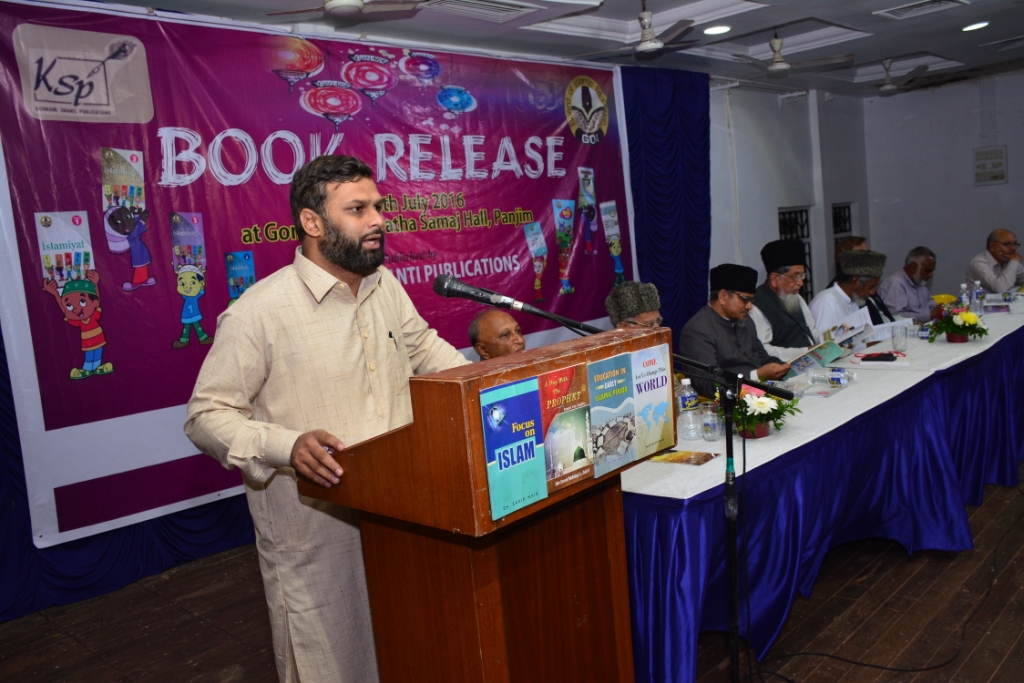 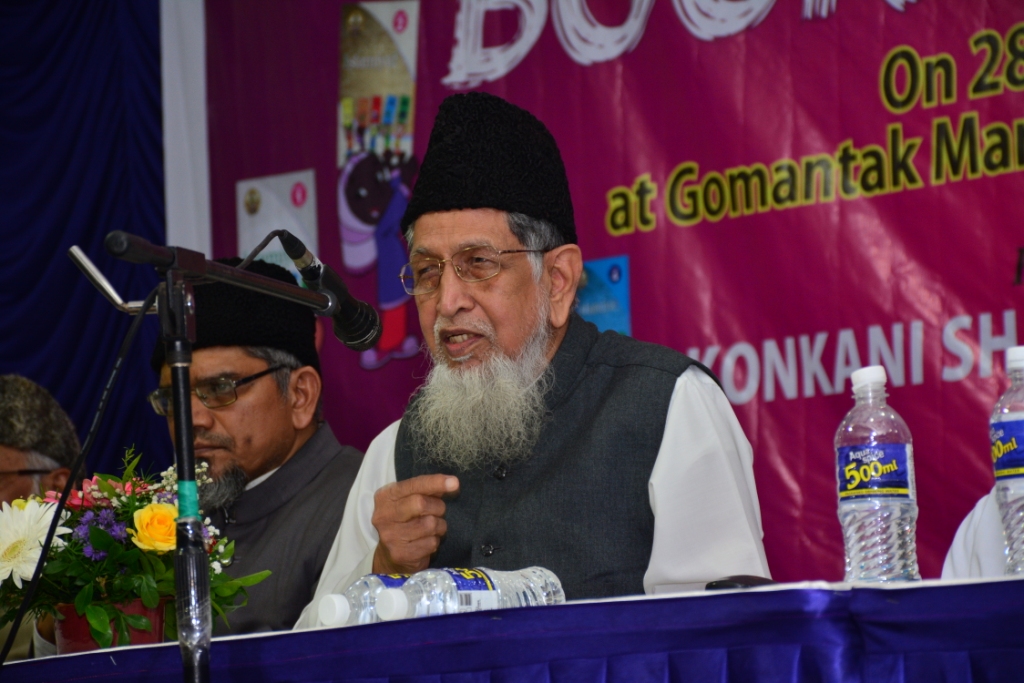 Konkani Shanti Publications (KSP), Goa in a grand ceremony of book release launched the ISLAMIYAT books designed for the weekend Islamic classes conducted by Board of Islamic Education (BIE), Goa

The Gomantak Maratha Samaj hall, Panjim was packed beyond its full capacity on 28th july 2016 for this enlightening & enriching program. The event commenced with the recitation of the holy verses of the quran by Br.Mohsin Haroon

Janab Abdul waheed Khan sab, Chairman of BIE & Ameere Halqa of JIH Goa delivered the inaugural speech in which he highlighted the impact of colonial rule in keeping the community engrossed with western values and how important it was to initiate the process of educating our children with Islamic values. Summarizing the 6 years of BIE journey Waheed sab enlisted the key achievements of BIE and concluded with an appeal to orient the younger generation of Goa towards Islamic values making them competent professional and a committed muslim.

The guest speaker of the ceremony Janab Eejaz Ahmed Aslam sab, Editor-in-chief of Radiance Viewsweekly , New Delhi delivered a talk on the topic “Guiding children in the present challenges” .

The learned speaker addressing a gathering of 625 reiterated the role of humans as servants and vicegerents of Allah, the importance of gaining knowledge, the duty of orienting the younger generation on the values of Islam.  Pointing towards the Goan culture he cautioned the participants about the atmosphere of this tiny state containing elements which drag our youngsters towards anti-beneficial activities and invited the audience to counter this challenge through strong Islamic orientation. To achieve this herculean task the Islamic scholars, the intellectuals, the teachers, people with wisdom, men & women should all play a key role in this regard said the speaker of Peace TV.

Janab Eejaz sab got into the inspirational mode when he emphasized the vital role of a mother in the ethical upbringing of the child, concluding his talk he appealed to the large gathering of ladies (around 350) who outnumbered the gents in attendance ,to realize their role and create a generation who would testify to be the QHAIR-E-UMMAH

A short video documentary of 20 minutes on the journey of BIE weekend classes was screened on the occasion and the same time Islamiyat website (www.islamiyat.in) was launched by Dr.Hasan Raza, Director of Islami Academy, Delhi. The key features of the website were briefly highlighted by Br.Ateequr Rahaman, Member, BIE, Goa

It was delightful moment to watch the galaxy of guests from across the country that did the honors of releasing 9 books published by KSP amidst the presence of educationists, scholars, intellectuals, teachers, professionals and prominent individuals from the community.

The 6 BIE books which were released are Islamiyat Level 1 to Level 4, Al-Misbah & My Dua

The final segment of the event was the enlightening and enriching concluding address by Moulana Syed Jalaluddin Umri Sab, Ameer, Jamaat-e-Islami Hind.

The author of several books of international repute Janab Umri sab started his talk with the punch line “BOOK IS FOR THE GUIDANCE OF MANKIND” by the lord of the worlds and in the same breadth stressed that “guidance is for those who want to live righteously”. The world today is immersed into darkness and it is this BOOK (The QURAN) which serves as a guiding light for the problems of entire humanity.

Seeking attention of the audience the Islamic scholar said that every parent strives to provide his children with the best of schooling, clothes, food etc but one must imprint in his mind that “THE BEST GIFT a PARENT CAN OFFER HIS CHIDREN IS ISLAMIC MANNERS & EDUCATION”

Orienting our children with the fundamentals of Islam, acquainting them with the values & principles of Islam is obligatory. A child (Boy & Girl) who reaches puberty needs to be aware that prayer is mandatory on him or her, our children should know in the similar way about other Islamic values & manners. If in Goa the atmosphere is still not conducive to these things, the learned scholar said that it is the responsibility of the muslim ummah of Goa to “CREATE AN ISLAMIC ATMOSPHERE for OUR CHILDREN”

The proceedings of the event was Convened by Janab Asif Hussain, Secretary JIH,Goa

A book stall by HOUSE OF WISDOM with Islamic literature was set up for the benefit of the audience; hundreds visited and took home the Islamic treasure. The program concluded with a networking dinner.