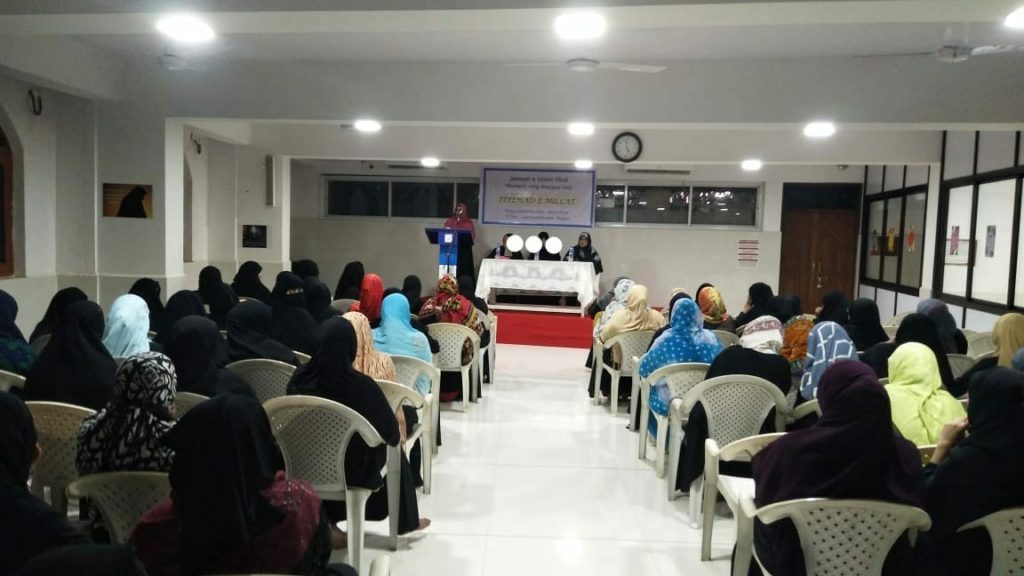 ‘Women’s Wing’ of Margao unit, Jamaat e Islami, Hind, Goa organised a programme on the theme “Ittehad e millat’ (Unity of the Ummah) on Friday 5th of October, 2018, at Al Aman auditorium, Sirvodem, Margao. Speaking on the occasion, Mrs.Tabassum Haliyal, President of the unit said ‘ Solidarity of Muslim ummah is the need of the hour and if we are united then we can solve the problem faced by the Ummah and also help the society. She further said that the purpose of the program is to build better understanding between the different Muslim groups by inviting speakers from different jamaats. Mrs. Rizwana swalehati, from Tabligh Jamaat, in her speech said that, if we analyse the root cause for the deterioration of Muslim Ummah then we will find that the reason is nothing but the disunity among our Ummah and also due to our lack of knowledge of Quran. She said that this has been our greatest weakness. She further said that, to change the state we need to get united again. Mrs, Shaheen Choudhary from Jamaat E Ahle Hadees, in her speech said that, ‘Conflicts do arise on the ground of lack of knowledge, but that should not be the cause for the division of Muslim Ummah . She said that, we cannot get divided when our basic foundations are same. She further said that, Quran and Sunnah of Prophet Muhammad (saw) are the provisions for the success for our Aakhirah’. In her concluding address Mrs. Saira Banu (State President of Women’s Wing of JIH, Goa) said that ‘ We will face difficult times ahead, if we do not unite on the basis of being Khair e Ummah and if we do not discharge our responsibilities. She said that, we need to come together on a single platform ignoring all our petty differences and unitedly try to find a solution to our problems. She further in her speech said that “We have to educate our people to avoid arguing over matters under the domain of the scholars, and that the top leadership of all groups understand each other’s opinion and have good relations based on their knowledge of Islam. She said that every leader from different groups has to play a crucial role to educate masses about the fundamentals of the Deen’. The programme concluded by saying Dua.