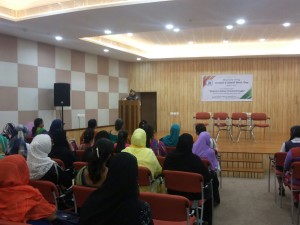 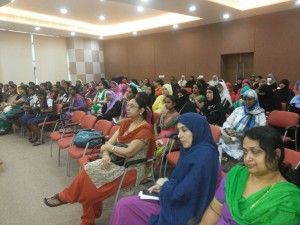 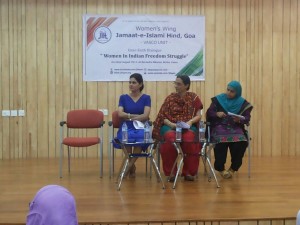 The Women’s Wing of Jamaat-e-Islami Hind, Goa, Vasco unit  organized a program on the topic “Women in Indian freedom struggle”

In the inaugural address  by the President of Women’s Wing, Mrs Shaista Shah  she  introduced the Jamaat as a nation-wide  organization working to reform the society on the basis of the divine guidance. She briefed the audience  of  the various activities undertaken by the jamaat.. She also stated the need for such programs to acquaint the citizens of the contributions all communities towards the freedom struggle. She said that through such programs the we could stem the growth of mis-understandings and promote mutual co-operation for constructive welfare of all.

Miss Diksha Mahale who was the first speaker spoke about various female freedom fighters of that time who are seldom mentioned in history. she mentioned about the contributions of Bimabai Holkar, Kasturba Gandhi and begum Hazrat Mahal in the Indian freedom struggle

Mrs Joselyn Henriques mentioned about the the various evils which was practiced against women and yet they all stood united as one against the British. In the end she said a small prayer for all . Mrs Monica Aurora said that we are discussing a topic because we have forgotten about the pain and sacrifices made by our freedom fighters .

Mrs Samima Asif Hussain in her address  said that Muslims played a very important role in Indian freedom struggle. She lamented the fact that history books in schools mention little of the contribution of Muslims during freedom struggle and names of women such as Azgari begum, Zubeda begum, Surraya, Abadi and Amjadi Begum  etc are not known to people. She said that if the new generations are not made ever of the contributions and the pioneering role of Muslims, we may leave room for mischief mongers to spread falsehood in the name of history.

She also stressed upon the need that we have to work together to make this society a better place to live peacefully.

Later Mrs Rehana Khan  presented mementos to the speakers and  Miss Aamna Khan  proposed the vote of thanks.