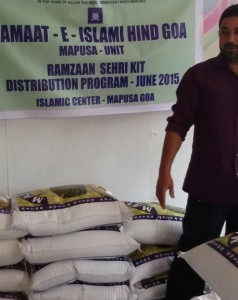 Humanitarian Relief Society Goa has been in the forefront organizing relief and rehabilitation during natural and man-made calamities. Recently it collected funds outside masjids across Goa for the victims of Nepal earthquake.

HRS-Goa has taken many noble initiatives to see that the weak and uncared widows and  senior citizens living in poor localities are provided with  the basic necessities of life. HRS- Goa Margao unit has arranged  for special “Sehri Kits” for Ramadhan 2015 . The local co-ordinator Jb. Moinuddin Khan said that the kit consisted of rice, cooking oil, dal ,sugar and other basic daily needs. He said  Goa is a well to do state and  yet there are many widows and senior citizens ignored by their children. He said every month he and his colleagues go house to house distributing the ration kits.

Bashir Naik from Mapusa is the HRS-Goa co-ordinator for North Goa  and he said that they distributed similar “Sehri Ration Kits”  in residential colonies around Mapusa. He said  during Ramadhan people are inclined to acts of charity and approach HRS-Goa to arrange the distribution of food packets for the poor and needy.  Bashir Naik was very appreciative of the locals in Mapusa who came forward and contributed to the “Sehri Ration  Kit”