Latest
You are at:Home»Regions»Mapusa»“Role of Women in the Indian Freedom Struggle” IFD organised by womens wing JIH Goa 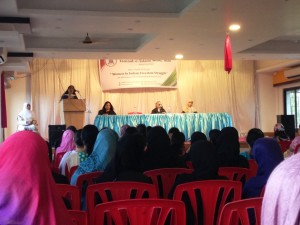 The program began with the recitation of Holy Quran by Mrs. Farida Banu Baig followed by the inaugural address by Miss.Ambrin Baig where she briefed about the challenges women are facing today and what practical solutions could be taken and applied through the programme.
Mrs Florence shared her view on the on the topic stating she was shocked to know that there was much contribution made by Muslims during the freedom movement. She said it was saddening to know that it was hidden from the public for so long.
She quoted the names of different women who took part during the freedom struggle and explained each individuals role and contribution. Further with regard to Goa she said that due to all the evils like alcoholism and drugs, Goa was turning into a deadly state. Also all the women irrespective of caste and religion should get together and strive together in times of need.
Dr. Sunita Umraskar addressed the gathering by again reiterating that she was amazed that much information of role of muslim women in Indian freedom struggle was hidden.
She said that in ancient times women were treated equal to men but as man progressed, evils started cropping in the society.
She named a few more women with their outstanding contributions and said that each one of us should get inspired from these women and free ourselves from our own selfish motives.
She said that moral values were lacking in today’s times. And the so called ‘modern woman’ must give quality time to the family since she has the power to keep the family happy and hence women need to get positivity from each other.
Finally she said that women should get educated and not merely literate and make proper use of it and reach out to each other.
The last speaker Mrs. Shehnaz Shaikh elaborated on the same and explained how women have been exploited in the past and how the exploitation has taken a new form. She said that in today’s world in the name of liberation woman is misused as commercial commodity.
She also put forth the idea of a strong belief in the oneness of God Almighty, which she said can be the foundation on which all mankind can get together to work unitedly towards improving the quality of life. She said that many of the problems of the society would perish if we believe and act in accordance with guidance given by the Prophets who liberated man from the servitude of man.
The programme ended by distribution of mementos to the guests and vote of thanks by Miss Saniya Malik who convened the whole programme.