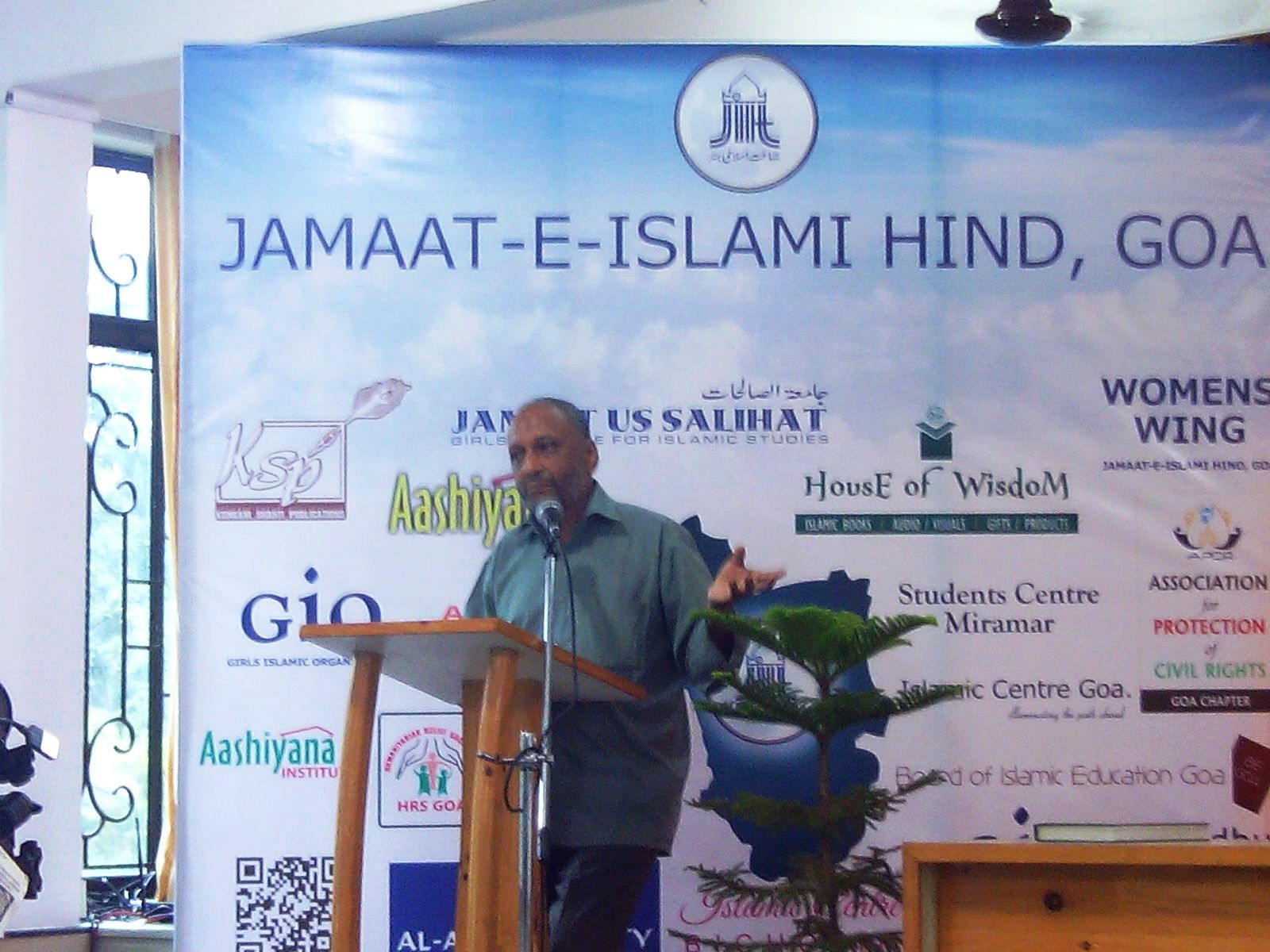 An all Goa 2 day training and self-development program was organized by Jamaat-e-Islami Hind Goa Zone for its cadre at Islamic Centre Goa on 30 th and 31 st August 2014. The program was conducted under the guidance of Jb.Nusrat Ali [General Secretary JIH].

The program began with the recitation of words of wisdom from the Holy Quran by Maulana Zafar Alam Nadvi. He impressed upon the audience the Quranic invitation to enter faith in totality without reservations and conditions. This was followed by Inaugural words by Jb. Abdul Wahid Khan [Ameer- e- Halqa – Goa]. In his address he exhorted the cadre to self-introspect and identify areas for self-development in the light of the desired norm as mentioned in the constitution of JIH. Jb.Nusrat Ali, in his talk “The changing situation in the country and our responsibilities”, advised the cadre to prepare themselves to play a greater role in the reconstruction of the society and to protect and preserve the pluralistic nature of the country.

The post break session included a critical evaluation of the last 3 years policy and program of JIH Goa. Individual growth and spiritual development was linked to collective efforts and its impact on organizational performance. A questionnaire collected from the cadre was evaluated to scale the growth rate on different fronts. The next open house session was dedicated to identify solutions to the problems that restrict the growth of an individual and an organization. The evaluation and open house session was conducted by Maulana Abdul Mubeen Asari.

In the post lunch session Jb. Zainuddin Shaikh [Secretary – Goa Zone] presented a report of the activities of the various cells of Jamaat-e-islami Hind. The PPT presentation included activities of all the departments in the light of the policy period 2011-15. During the presentation respective heads and members of the departments were called to clarify the issues raised by the house. Later the cadres were given the opportunity to raise questions on the activities during the policy period to Ameer-e Halqa and Secretary halqa of the zone. In a healthy atmosphere the cadre raised issues that zonal authorities needed to address.

At the end of the first day Jb. Nusrat Ali eloquently advised the members and workers of Jamaat-e-Islami Hind Goa Zone. He emphasized the role of the zonal leadership in motivating and advising the cadre and the local leadership on the basis of the quarterly reports submitted. He said to Identify the strong points and the shortcomings and give remedial guidance to the solve issues is a must and should not be avoided. He commended the Goa Zone for the vast improvements in the current policy period and asked the cadre to work with purity of heart for the welfare of mankind.

Day two of the program included topics that covered introduction to the different Muslim Jamaat working in India. The thought and work of Bareilvi, Tablighi, Deobandi and Ahle-Hadith was addressed by Jb. Abdul Mobeen Asari. A critical analysis of the methodology, effectiveness and usefulness of modern day Muslim dawah orators was presented by Jb Asif Hussain.

Jb. Mohammad Abdullah Javed introduced the typology /stratification of the Muslim world based on their outlook and approach towards Islam and their views on democracy, secularism and gender issues by the western policy makers. He elaborated that the policy makers have grouped Muslims into liberal and secular Muslims , the regular Islam and Muslims are the ritualistic Muslims , the civil democratic Muslims , the moderate Muslims are Muslims who support democracy, gender equality, freedom of worship, oppose Islamic struggle and are agreeable to non-religious sources of law; all the above four are used and manipulated as and when required to achieve western agenda against Muslim world and lastly radical Islam a term used for Muslim groups that emphasis Islam as a way of life which includes Islamic solutions to issues facing mankind. The last group are opposed and crushed by the western governments and first four groups are used against the Radical Muslim groups. He said western governments based on the study of the Muslim world by the agencies frame policies that try to foster divisions within the Muslim world through promoting Arab nationalism versus non-Arabs, Sunni – Shia rift and supporting coups and overthrowing democratically elected government. They also extend unconditional and overwhelming support to individuals and organizations from the Muslim world for speaking against Islam.

Other lectures included were ‘Islamic movements amidst propaganda and equation of world politics and Muslims’ by Jb. Abdul Wahid Khan [Amir eHalqua – Goa]. In the last open house session many relevant issues in the contemporary period were raised and clarifications sought. The program concluded with prayers for enlightenment, constancy and patience in all situations. Jb. Zainuddin Shaikh [Secretary – Goa Zone] proposed the vote of thanks.