Latest
You are at:Home»BIE»BIE TEACHERS ORIENTATION PROGRAM HELD AT ICG 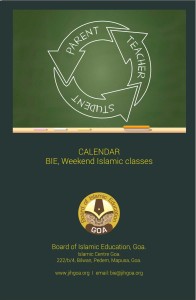 With the new academic year having begun, Board of Islamic Education (BIE), Goa recently conducted orientation program for teachers of 9 BIE centres of Goa.

The program commenced with the recitation of the Holy Quran followed by the Inaugural talk given by Moulana Abdul Mubeen Asri, Secretary BIE, Goa.  Key points pertaining to the BIE weekend classes for the current academic year, the orientation behind designing the new syllabus, methodology of teaching subjects , need for teachers commitment  were highlighted.

Detailed explanations of the five subjects to be taught during the weekend classes namely Arabic, Urdu, Islamic Studies, Dua & Personality Development were presented to the teachers by the members of the BIE Syllabus committee, doubts & clarifications were addressed after each presentation to ensure clarity

Moulana Zafar Alam Nadvi emphasized the importance of teaching Arabic & Quran to the present generation and explained in detail the methodology adopted by BIE to the teach the same also the different  tools to be used were introduced.

Janab Abdul Waheed Khan Sab, Chairman, BIE,Goa in a very elaborate historical perspective mentioned how the Urdu language & its literature has played vital role in promoting the teachings of Islam to the masses, the learned speaker also quoted the famous legendary Islamic poet Allama Iqbal during his speech and stressed upon the need to strengthen urdu amidst efforts to curb the language.

Speaking on the Subject of Islamiyat (Islamic Studies) Moulana Abdul Mubeen Sab said that the entire exercise of putting tireless efforts on the project of BIE is to achieve the objective of imbibing Islamic values among the students. The different categories and topics that will be covered through this subject for different classes and the tools to be used were introduced to the delegates.

Br. Sarfaraz Bawa gave a brief introduction on how to teach Dua during the classes, the special feature of using multi color dua book with illustrations was also shown as a presentation

The need & importance of Personality development subject, the concept & orientation of BIE for this academic year was highlighted through a PowerPoint presentation by Br.Ateequr Rahaman. Various real life examples were quoted to emphasize the need of dealing with students based on individual traits rather than negative labeling of the individuals.

The BIE events calendar for the current academic year was explained by Br.Mohammed Anees through snapshot presentation of the printed calendar copy.

The post lunch session comprised of interactive session on Administrative Issues coordinated by Br.Ateeq . The principals & teachers of all the 9 centres participated with their concerns & inputs during the session which were noted for further consideration by the BIE committee.

An open house session was presided over by the chairman of BIE Abdul Waheed Khan Sab & Secretary Moulana Mubeen in which various aspects of the project implementation were reviewed. Queries & concerns from the teachers were answered during the session

The program concluded with an inspiring & motivating presidential address by Janab Abdul Waheed Khan sab, Ameer-e-Halqa , Goa. The tireless, dedicated efforts of every single teacher associated with the BIE project was highly appreciated by the chairman of BIE. The event concluded with Dua