Board of Isamic  Education (B.I.E) of  Goa  organised  a “Students Day”  for the  students of week-end Islamic Classes of four units namely  Dabolim, Vasco, Cansaulim and  Pilar at  Vasco Residency  , Vasco. The program  started at 9:30 am with lots of preparations and enthusiasm. The convenor was  Miss  Zeba  Makandar ,the president of G.I.O  Vasco unit .

The “Students Day” started   with  the  recitationof the Qur’aan  by Khadija Hadginad .The inaugural  address  was delivered  by Mr. Altaf  Shah  where  he appealed to  the parents to encourage  their children towards Islam and its teaching . He said the “Students Day”  celebrations was an attempt to encourage and motivate the students in their journey of learning  Islamic beliefs and values. He briefed the gathering of the various efforts   during  the past year. He spoke about   the introduction of e-learning to improve the effectiveness of the classes. He briefed the gathering of the journey  of the BIE Goa and thanked everybody for their co-operation.

The children from  Cansaulim were the first to perform at the “Students Day” celebration. They first presented a Hamd and later Ansika Mulla and her group  presented a “Naath” . Story telling was presented by Ansiba Mulla.  Hadith of  Prophet  Muhammad (P.B.U.H)  and a  beautiful  skit on morals was also presented by Cansaulim BIE students.  An act on good behavior towards mother featured in their program too. The second  presentation  was   by the Pilar unit  with the recitation of the Qur’aan  Surah Ikhlaas, a charming naath was a presented with the most sweet voice by a group of boys on the qualities of Prophet Muhammad (P.B.U.H).The praises  to  Allaah were also given by the students of CC, Miss Sania Khan.  A speech on  the importance of   namaz and a hadith was  presented by the student  Mushra Sheikh . A  skit was put forward by the Pillar unit on the theme  “Impact of bad company’. The parents of the children and other  prominent guests at the function applauded the performance of the children .

The next  unit  to present was  Dabolim unit ,the unit started with the recitation of the surah At-Tin.The hadith was presented by Muhammad Subhaan with its meaning  by Falak Fatima,a short  speech on Jaffer  (R.A) was delivered by Miss Rubiya Shaikh, a beautiful prayer in a sweet voice was also presented by the girls of the Dabolim unit.  The seerah(life biography) on Aisha (R.A) was  presented by Ruksana Shaikh followed  by a group nath  on character traits of  Prophet Muhammad (P.B.U.H).  A moral skit was presented on the theme ‘Effective and ideal parenting’ which  gave the parents knowledge on how to train their children towards Islam and the right path. The skit was highly appreciated and the performance by each of the students received appreciation from the audience.

Finally  the last centre namely  Vasco  unit  started their session  with beautiful recitation of the  chapter  Aa’laa from the Quran  followed by  its meaning. The  performance of the tiny tots of Junior Children Circle  left a lasting impression on the gathering and tears of joy rolled down the cheeks of the parents of the participating children . Later in the session a  skit was presented by the unit on the theme ‘Mercy towards parents’  followed by hadith  narration and recitation of  verses  from the Qur’aan . A short speech was delivered by Sarah Baig  on the role of Masjids. The seerah (life biography) on Sulaiman(A.S) was narrated  by Hiba Salah  .

The secretary of B.I.E  Maulana Mubeen  distributed the certificates to the centre co-ordinators of the four units and he also concluded the programme by speaking on the importance and objectives of B.I.E and its moto. He congratulated the parents who got their children enrolled for the BIE Islamic classes and said this will help mould the children to live a life in accordance with the ideals of Islam. He said BIE has constantly  strived to  update and orient the BIE teachers with effective teaching skills. He said the dedication of the teachers  was such that they have in spite of their  responsibilities of home management have sacrificed their Sundays  to educate the children. He thanked them for attending all the training and orientation camps organized by BIE on different occasions. A brief  photo session was held of all the units one by one and prices were also given to every student .

The other attractions of the  “Students Day”  celebration  included an exhibition of models prepared by the students on various themes . There was a huge rush by the parents to  see the art and craft models prepared by students to educate and enlighten the audience with the  various aspects of Islam.  Hijaab, five pillars of Islam ,taqwa , junk food and home  made food, Islamic family system, negative impact of  interest based loans, hajj rituals were few of the  many topics covered . The students of Mapusa  centre were specially invited for their thoughtful Islamic art and craft models. The students were found enthusiastically explaining to the visitors to the exhibition the  Islamic message of the art and craft  models.

The program  was an opportunity for the students to show their talents and display  the impact of the Islamic classes on the personality of the students . The parents appreciated the efforts of the BIE centre  teachers for their hard work and sincerity. Mrs. Shaistha Shah  co-ordinated  the  “Students Day” celebrations.   Miss  Zeba  Makandar the president of G.I.O  Vasco unit  played the role of the host and compeered  the program. Mrs. Mallika Shaikh  arranged the  back drop for the program . 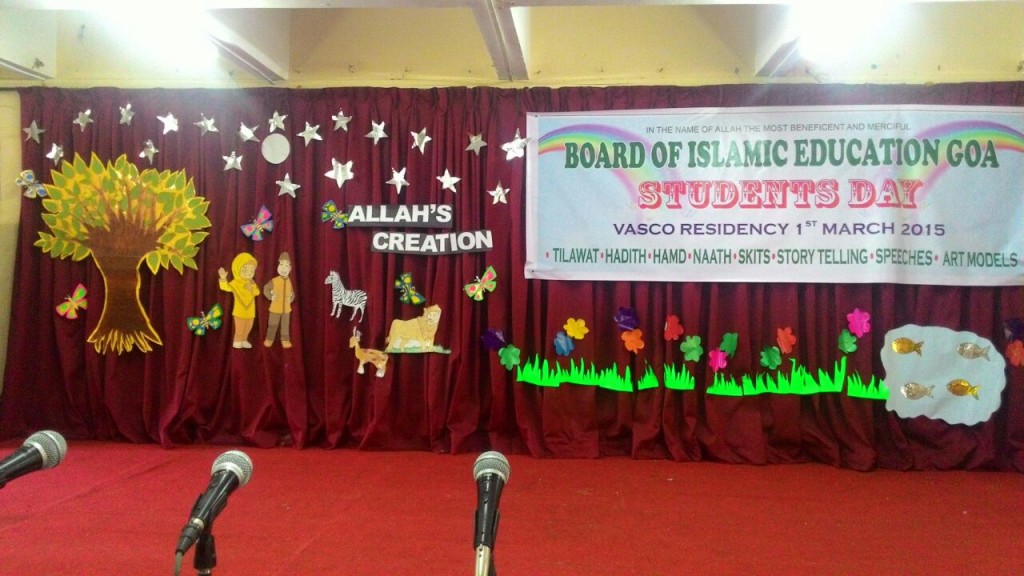 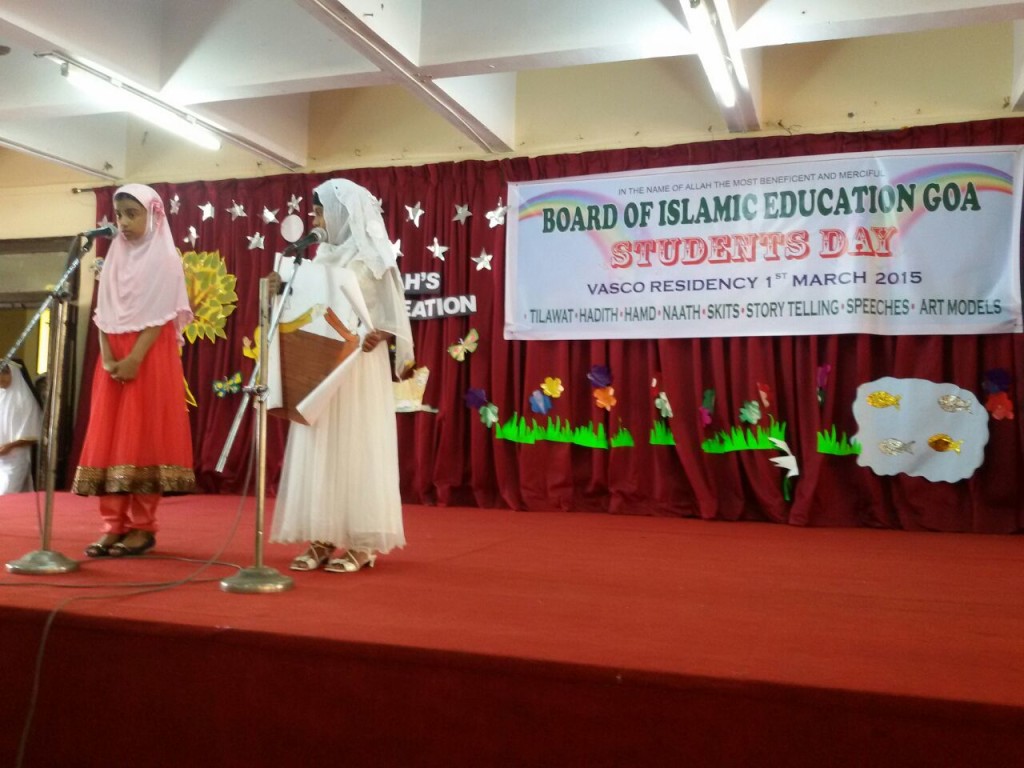 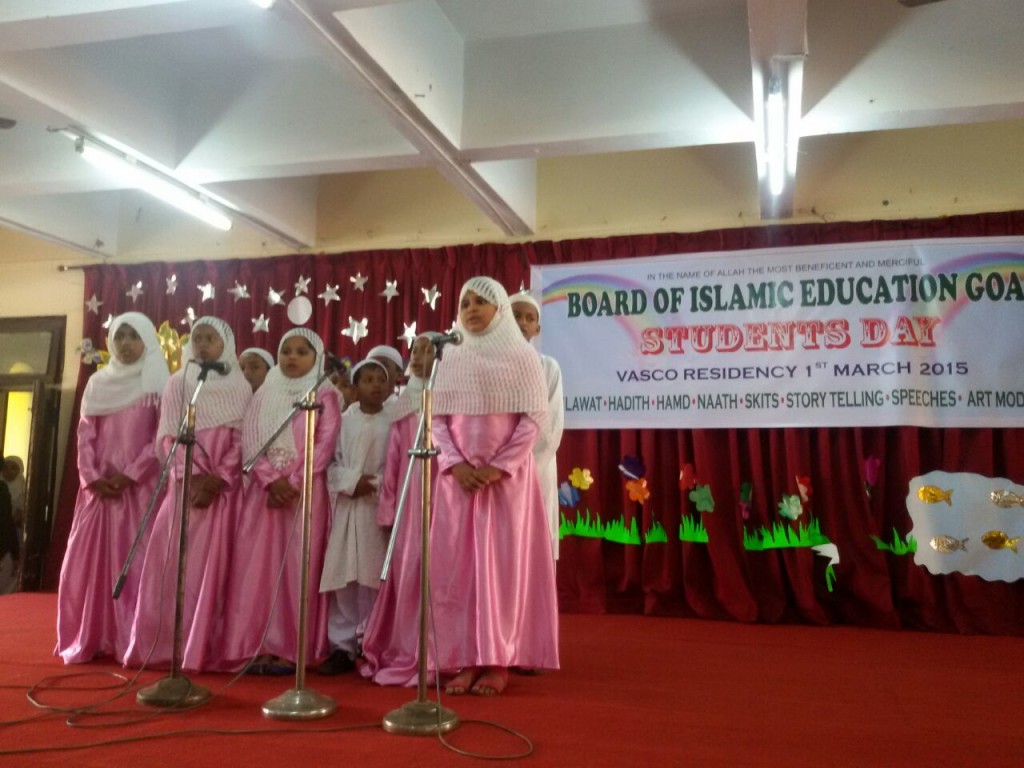 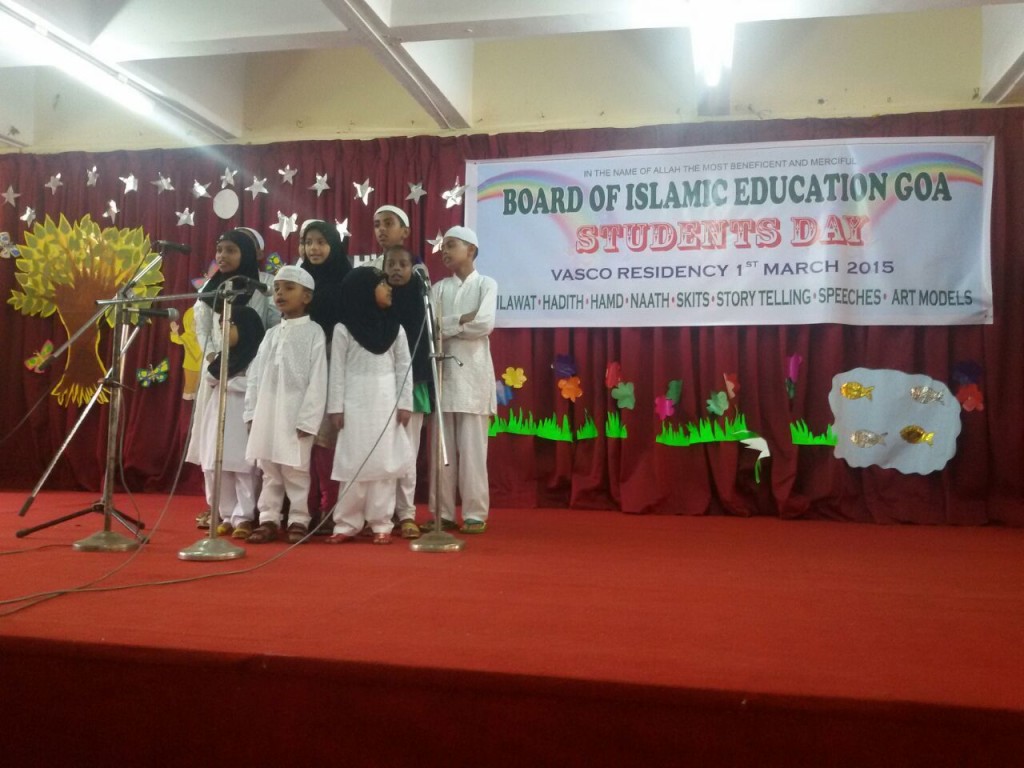 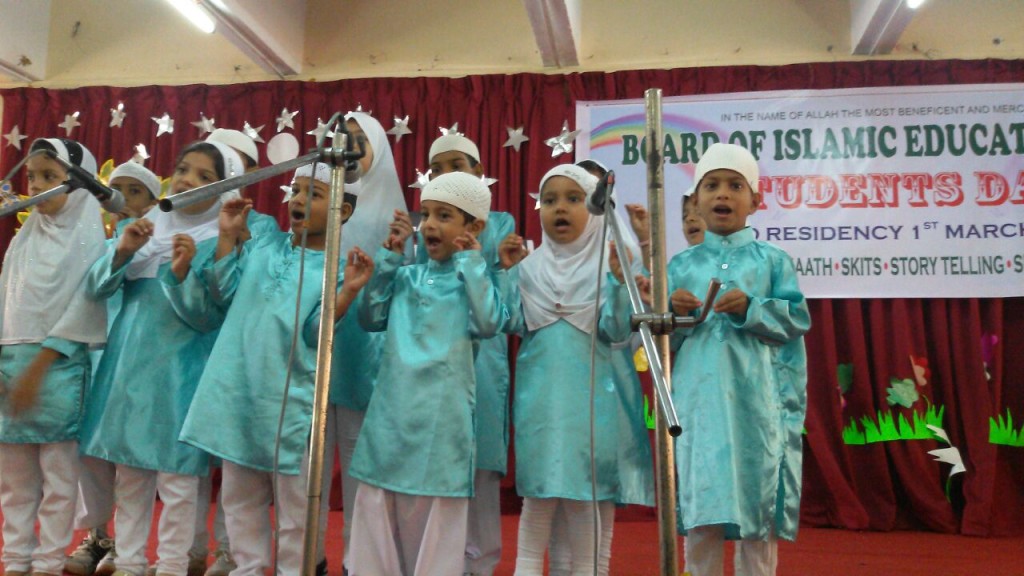 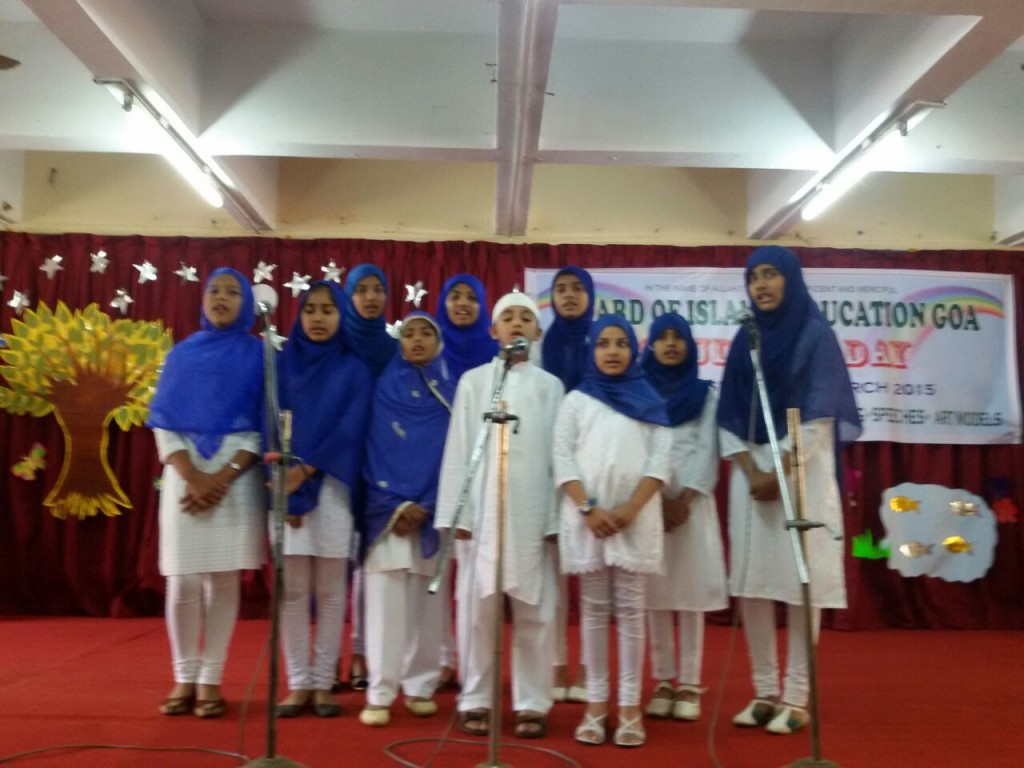 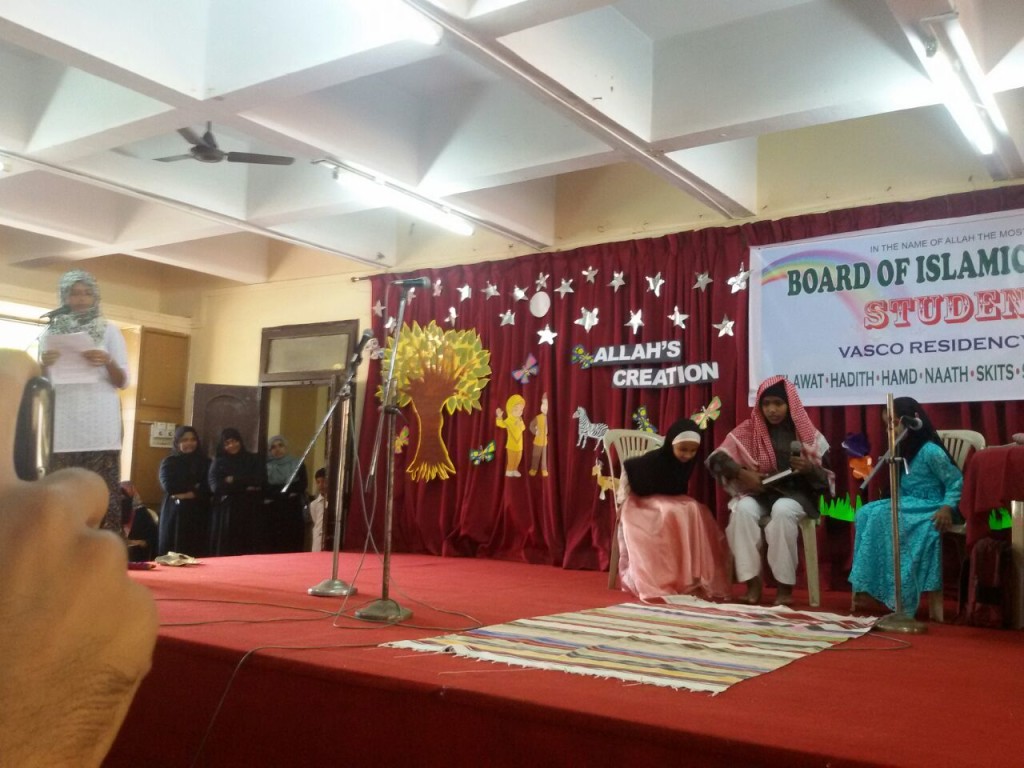 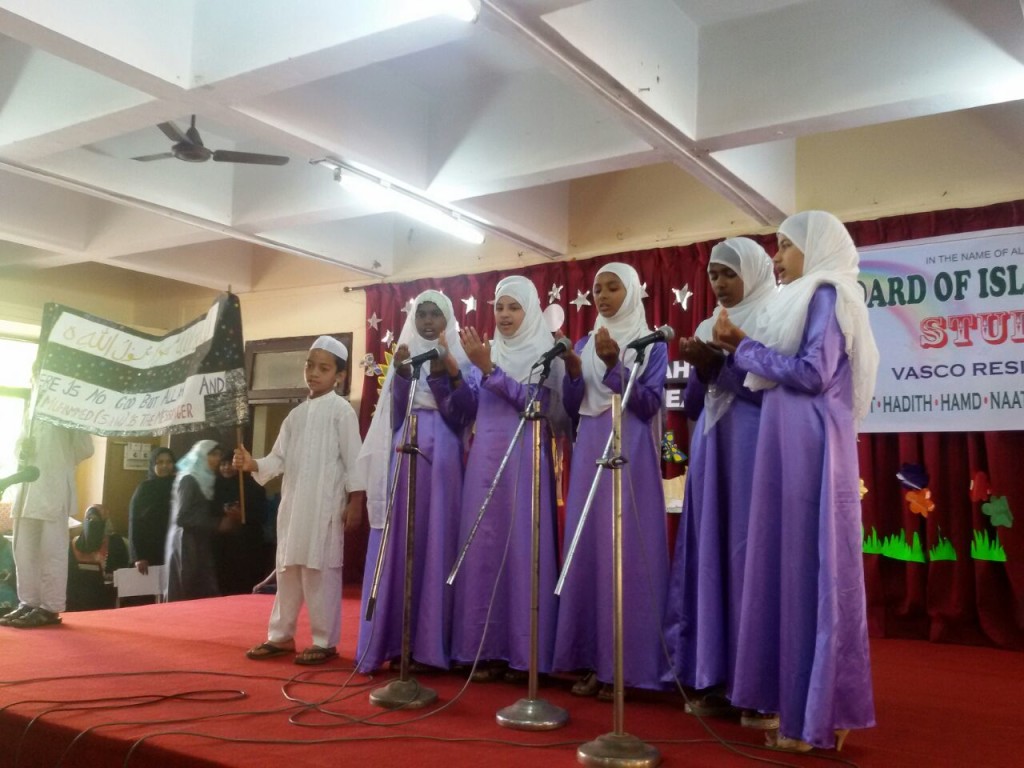