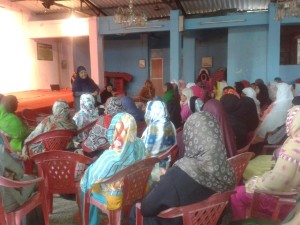 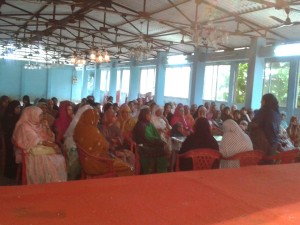 Isteqbaal e Ramadan program was held and organised by Women’s Wing JIH in Valpoi on 17th June 2015.
The program was held at City Hall Valpoi.  The program was convened  by Sineen Khan
The program began with the recitation of the Quran  by  Mrs. Firoza Mirza. The main topic of the day
“Isteqbaal e Ramadan” was addressed by Mrs. Nusrat Sayed. She said the month of Ramadhan is a  month of  training the will power and learning self restraint. It is a month to get closer to Allah and ponder over the guidance in the Quran. She said it was also an opportunity to be grateful to Allah for the gift of guidance through the Quran. Later a lecture on
Zakaat and a  Documentary “Inside Goa”  was  presented by Ms. Aamna Khan.
The program concluded with  Dua by Mrs. Afshan Khan.