Latest
You are at:Home»BIE»Young Leaders summer camp for girls organised at Mapusa 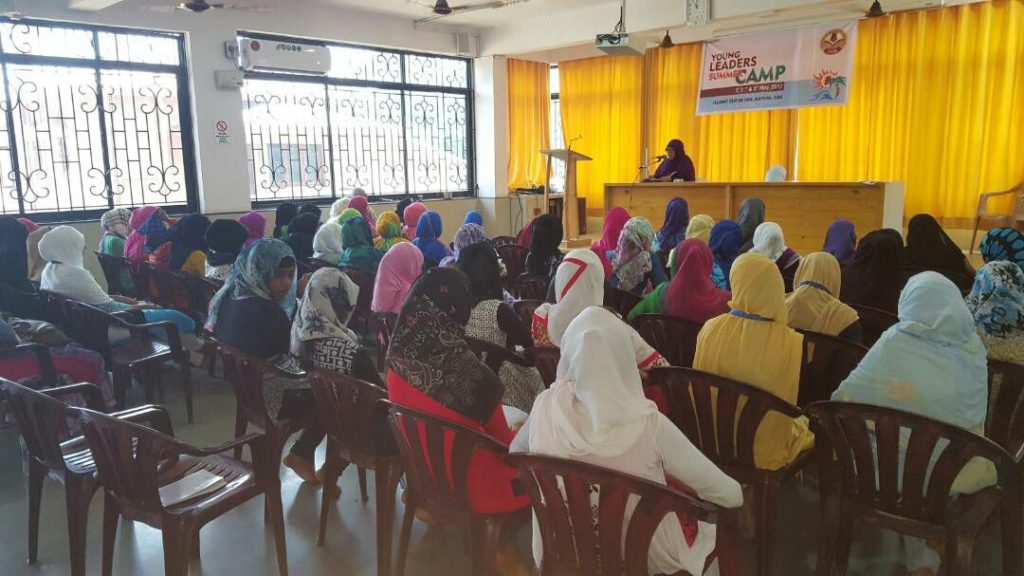 The 3 day Young Leaders summer camp was organised at the Islamic centre, Mapusa- Goa.
It began with Tazkeer bil Qur’an of Surah Al- e Imran by Mrs Afshan Khan. She explained the importance of knowledge and said that gaining knowledge is obligatory on every Muslim.
Mrs Gulzar Parvin in her inaugural words explained the importance of organizing the camp.She said that the purpose of the camp is the orientation of younger generation towards the success of their aakhirah. She also said that all the participants are one family and the camp aimed to strengthen the bonds between the JAC girls and the GIO members.
Mr Firoz Khan conducted a session on collective life. He elaborated on the importance of team work and said that students must have a very clear vision about their career and dedicate all their efforts to achieve it.
After a short tea break Mrs Farheena Hussainy conducted a group study on the book ‘The road to peace and salvation’. All the groups presented their views about the different aspects of the book.
Mrs Ambrin Beig briefly explained the important qualities which were expected from GIO members. She said that members of the organization should be role models for the people of the society and work together towards achieving Jannat.
To refresh the participants a brief session on physical fitness was conducted by Mrs Muneera Ali followed by a talk on Children of Comforts by Mrs Nazrana Darvesh. She explained that people associated with a movement like Jamat e Islami should be strong and tough to face the world.
Mrs Nazrana continued with the last topic for the day on Social Media Addiction wherein she showed how today’s children were always into gadgets and how it could have a very negative impact on the future generations.
Day 2 began with the recitation of verses from the Qur’an by Miss Tuba Shaikh.
Mrs Shehnaz Shaikh put forth the inspiring life of Salahuddin Ayyubi. She said that he spent more than half of his life in spreading the word of Allah.
The life of Imam Gazali was presented by Mr Akbar Khan. Imam Gazali was an original thinker and he had knowledge of things in depth he added.
Miss Sharmin Khan presented a PowerPoint presentation on the journey of GIO in Goa. She gave a glimpse of all the activities which the caders have been doing since the last 9 yrs.
The world of books was explained by Mrs Gulzar Parvin. She stressed upon the importance of reading and she also presented tips on cultivating the reading habit. Reading improves the process of thinking and makes a person broad minded she added.
Miss Sharmin Khan presented a PowerPoint presentation on it’s my life. Through her presentation she told how the present day attitude destroys the lives of many youngsters and the ways in which adolescents should act and have a positive attitude.
Social service which is an integral part of a person’s life was presented by Mrs Shaista Shah. She motivated the young girls to help each other and explained regarding the joy of giving.
The last topic for the day was a book review of ‘Witness Unto Mankind’ by Mrs Tamanna Shaikh. She explained in detail the different aspects of the book and said that it was every individual’s duty to witness to the truth orally as well as through actions.

Day 3 began with Dua memorization after fajr Namaz, by sister Ambrin Baig.
The post breakfast session began with Tazkeer-bil-Quran by Mrs.Fareena Hussainy on the verses of Surah Al e Imran about “Holding fast to Allah’s rope”. Wherein she said that all have to keep themselves connected with Allah and not be divided amongst themselves.
A study circle conducted by Mrs.Meenaz Bhanu on ” Rise of Communalism and the Way Out.” 4 different groups were given 4 different articles on communalism to be studied and a group leader presented it.

After a short break she continued with her next topic “The Pledge for Transformation”. Wherein the GIO and JAC girls were asked a few questions and their opinions or suggestions on some problems which usually become hurdles on the way of internal development and what changes they would like to inculcate within them after the camp. An overwhelming response was given by the students and then considering the opinions of the students Mrs Meenaz Bhanu concluded the topic with some Quranic and prophetic guidance towards self transformation.

Next was the open house and feedback session conducted by sister Ambrin Baig wherein constructive feedbacks about the camp were given by the participants.

In the end the concluding address was given by Mrs. Afshan Khan and she added many important points to all those topics which needed few inputs and motivated the children to work towards a better Islamic future.